The second largest of the Summerset Isles, Auridon has always served the High Elves as a buffer between their serene archipelago and the turmoil of Tamriel. The Altmer of Auridon have been hardened by generations of repelling invaders, pirates, and plagues. 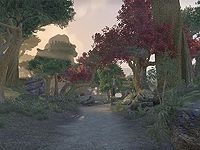 Auridon is the second-largest island in the Summerset Isles and the location of Firsthold, one of the largest Aldmeri cities in the world. It is renowned for its unique architecture and magnificent gardens.

Note: This article is a stub. You can help by expanding it.
Retrieved from "https://en.uesp.net/w/index.php?title=ESO:Auridon&oldid=2034522"
Categories:
Hidden categories: