The UESPWiki – Your source for The Elder Scrolls since 1995
< Online: Places: Cyrodiil / Cities / Explorable Locations
Jump to: navigation, search 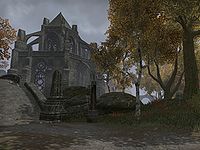 Cheydinhal is a city in eastern Cyrodiil, southeast of Arrius Keep. The Imperial Legion maintains shaky control over the town, although the townsfolk are in the midst of a hostile rebellion against the legionnaires.

While the city itself is divided between the Imperials and the rebels, the roads surrounding it are patrolled by the alliance which controls Farragut Keep, who may occasionally clash with the city's patrols - Imperial and rebels alike.

This ESO-related article is a stub. You can help by expanding it.
Retrieved from "https://en.uesp.net/w/index.php?title=ESO:Cheydinhal&oldid=2087050"
Categories:
Hidden category: