The UESPWiki – Your source for The Elder Scrolls since 1995
< ESO: Places: Stormhaven / Forts / Quest Hubs
Jump to: navigation, search 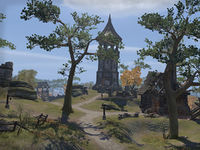 Cumberland's Watch is a fort in central Stormhaven, north of Wayrest. The fort has been overrun by the goblins from the Stonechewer Goblin Camp, whose tribal totem inexplicably appeared at the top of the fort's tower.

The book Sacred Rites of the Stonechewers can be found inside the northern watchtower, near Pierre Lanier.

Note: This article is a stub. You can help by expanding it.
Retrieved from "https://en.uesp.net/w/index.php?title=ESO:Cumberland%27s_Watch&oldid=2086622"
Categories:
Hidden categories: