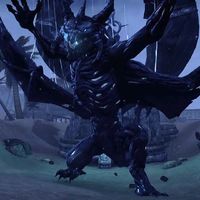 Daedric Titans, sometimes referred to simply as Titans, are giant, winged, crude imitations of dragons created by Molag Bal. Though he created them to serve him, soon after their appearance other Daedric Princes came into possession of their own, and Mehrunes Dagon even created a stronger variant—the Ash Titan. They are often deployed as the higher-echelons of Molag Bal's armies. One titan, Ozzozachar, even carries the title "Son of Molag Bal".

Unlike the dragons they were copied from, the titans have four fully-functioning limbs in addition to their wings. However, they cannot use the Thu'um, instead they have a crude imitation consisting solely of a flaming essence-drain spell.

This ESO-related article is a stub. You can help by expanding it.
Retrieved from "https://en.uesp.net/w/index.php?title=ESO:Daedric_Titan&oldid=2126056"
Categories:
Hidden categories: