The UESPWiki – Your source for The Elder Scrolls since 1995
< Online: Places: Stonefalls / Subzones
Jump to: navigation, search 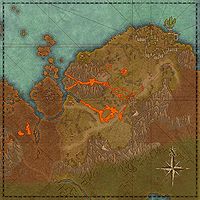 A map of Daen Seeth

Daen Seeth is the eastern region of Stonefalls. The city of Davon's Watch occupies most of the northeast, and Fort Arand lies on the southwestern border. The town of Senie is near the middle of the region. The Daen Seeth Dolmen is on the coast in the northwest, northeast of Ebonheart in the Zabamat region to the west. Bal Foyen borders on the east, while Deshaan is to the south, but there is no pass here.