One of the "Old Holds," Eastmarch was among the first regions of Skyrim settled by the Nords when they arrived from Atmora. Its capital, Windhelm, is the oldest continuously inhabited human settlement in Tamriel, and was founded by Ysgramor himself. 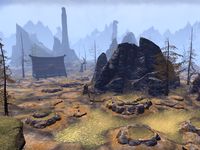 Eastmarch is the easternmost hold in Skyrim. Its capital is Windhelm, the home of Jorunn the Skald-King, High King of Skyrim, and leader of the Ebonheart Pact. Eastmarch stretches from the frozen wastes in northeastern Skyrim, to the volcanic tundras east of the Throat of the World.

Despite its size and importance, Eastmarch has only one sizable city, Windhelm. Windhelm sits at the mouth of the White River, which drains into the Sea of Ghosts. The port at Windhelm provides a vital link to other cities for trade, and there is also a small fishing fleet in operation. The Velothi Mountains to the east and southeast provide a physical border with Morrowind. The mountains are virtually impassable, and so the Dunmeth Pass at their northern tip provides a valuable land-link between the provinces.

Visitors to the region should take precaution when venturing towards the hot springs or into the wilderness. Many wild creatures can be encountered, notably among them frost trolls, the hardier cousin of the troll, and mammoths. Though mammoths appear docile, take care when approaching them as they are usually accompanied by giants, who may perceive you as a threat and attempt to scare you off. 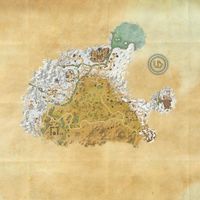 A map of Eastmarch

Note: This article is a stub. You can help by expanding it.
Retrieved from "https://en.uesp.net/w/index.php?title=ESO:Eastmarch&oldid=2034537"
Categories:
Hidden categories: