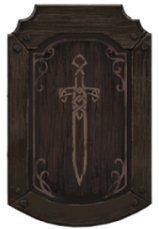 The Fighters Guild is a mercenary organization found all over Tamriel. To gain reputation with them, you must destroy Dark Anchors or kill Daedra and undead. Good relations with the guild has many benefits, including new skills and abilities.

Basile's Invitation: Accept an invitation to join the Fighters Guild.

All guilds use reputation for leveling purposes. Fighters Guild

Reputation is earned by killing undead and Daedra, as well as by completing Dark Anchor Dolmens. You receive 1

for killing undead and Daedra bosses, 20

for destroying a Dark Anchor, 10

for completing a Dark Anchor daily quest, and 25

There are six Achievements associated with this faction:

This ESO-related article is a stub. You can help by expanding it.
Retrieved from "https://en.uesp.net/w/index.php?title=ESO:Fighters_Guild&oldid=1940541"
Categories:
Hidden categories: