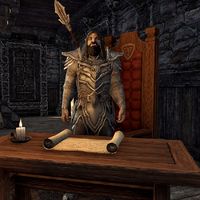 General Godrun is an Orc leader of the Murtag Clan as well as a high-ranking officer officer of the Daggerfall Covenant and a close friend of High King Emeric. He and his clan are currently facing the Ironhand Ogres at Shinji's Scarp.

As you enter the Officers' Quarters before reporting to Abbot Durak and completing Another Omen.

General Godrun: "Don't question my orders! Just tell the commander we need more soldiers and more supplies."
Murtag Messenger: "Yes, General. If you say we need them, then we need them."

He can be spoken to:

"So you're the hero Grandmaster Durak keeps telling us about? You're here at the perfect moment.
You like to fight ogres?"

"You're just in time. I need every able-bodied man and woman. You're carrying a weapon, so I assume you're able.
You like to fight ogres?"
If it helps to defend Stormhaven.
"It does. And by Mauloch, we need you! The Ironhand ogres have stopped us cold out there, a I can't afford to lose any more soldiers.
Will you join my clan—Murtag Clan—in this battle?"
Just tell me where you need me.
"We've been trying to break through the ogres lines for days. Sergeant Olfin is leading the charge.
If you can help him take the tower up on the rocks, we can establish a forward command post. The we're in striking distance to finish this thing."
I'll report to Sergeant Olfin right away.

"I brought my army here as a favor to King Emeric, but Murtag Clan has other battles to fight. We need to finish the Ironhand Ogres and finish them fast.
May your kills be quick and many, soldier."

Where did the Ironhand Ogres come from?
"The Ironhands come from our side of the mountains, from Wrothgar. They've plagued our efforts to rebuild Orsinium for years.
"Murtag Clan has fought them more times than I can count. That's why King Emeric asked us to come to Gavaudon's aid."

He asked you as a friend, or an ally?
"Both. I fought at Emeric's side in Ranser's war . We helped drive the Reachmen from Stormhaven, and in exchange, Emeric returned Orsinium to Orc hands.
That conflict was of mutual benefit. This one isn't."

You sound a little resentful.
:Because it was Bretons who destroyed Orsinium, and now Murtag Clan must come to their rescue? Maybe.
Emeric's my friend, and he's the High King of the Daggerfall Covenant, but we won't forget Orsinium. 'Wait until next time'. We...that's what we say."

You're in charge of the Murtag Clan?
"Our chieftain is in Wrothgar, but I am proud to say I lead Murtag Clan in battle. Centuries ago, Murtag Clan was one of the strongest clans in Orsinium.
We were nearly destroyed along with the city, but we are resilient."

Does Murtag Clan live in Orsinium now?
"Some of us do, some don't. It will be decades before Orsinium regains its former glory.
Many see the city as a reminder of past defeats. Nonetheless, Murtag Clan works to rebuild it, and to defend it from the Ironhand Ogres."

Once the warhorn has been sounded, General Godrun can be found at the bottom of the tower alongside Sergeant and some soldiers.

General Godrun:"Tell your soldiers to stand down, Sergeant. When the reinforcements come, we march south."
Sergeant Olflin:"Stand down? What do you mean? This is our chance to finish the ogres off!"

"Sergeant Olfin's impressed. Says you've got guts and you're fast on your feet.
Assuming you can fight, I think we found the hero to finish these ogres off."
When you're ready to attack, just say the word.
"Ha! There won't be an 'attack'. I don't have the soldiers to spare.
Abbot Durak says you're a champion though, and I trust him. I believe you can do this on your own."

"The ogres' leader is called 'Skull Crusher'. He's big, he's mean, and he's nasty, but you can take him.
I would send soldiers to help you, but another battle is brewing, and they have to prepare."
What other battle is brewing?
"It's a fight that's long overdue, but it's Clan Murtag's fight, not yours.
You fight is with the ogres. I need you to kill Skull Crusher and stop the ogres from coming through the mountain."
How do I stop them?
"The Ironhands have been using a cavern to get through the mountains.
I sent a mining team to collapse the cavern but they never reported back. Find them and help get it done. After that, we can clean up what's left."
I understand. I'll see what I can do.

Once Ending the Ogre Threat is started. There difference in his dialogue depending on race. (?) (Need an Orc character to verify).

"You're a credit to your race, soldier.
If you can collapse that cavern, Clan Murtag will be in your debt, and we pay our debts."

Throughout Godrun's dream, ghostly scenes will play out.

General Godrun: "Don't question my orders! Just tell the commander we need more soldiers and more supplies."
Murtag Messenger: "Yes, General. If you say we need them, then we need them."

Commander Bagda: "Sorry General. We can't deploy so many against the Ironhand Ogres. Why do you ask for three regiments?"
General Godrun: "Vengeance. Emeric trusts me. I can make Wayrest suffer as Orsinium did!"

General Godrun: "I won't refuse allies, but don't forget who's in charge."
Supernal Dreamer: "Of course. After we sack Wayrest and kill the king, you can have the city. We just want the people."

After General Godrun has been woken up, you can speak with him.

"I don't understand what happened. I feel like my body, my mind, were not my own. A fate worse than death.
Thank you for restoring my mind. Now I must restore my honor."

Speaking to him again after the quest:

"I pledge my life to helping King Emeric ... and to destroying anything, anyone, associated with Vaermina."

While trapped in his dream, Emeric is tormented by his nightmares of betrayal, loss and failure:

General Godrun: "The Daggerfall Covenant needs a stronger ruler, Emeric. Your reign as High King has come to an end. I'm taking Wayrest."
High King Emeric: "Damn it, Godrun. We've been friends for years …! How can you just betray me like this?"

You'll come across a hostile version of the general and he'll say:

He can be found in Wayrest Castle after you save King Emeric from Vaermina, kneeling in front of the throne.

"Your Majesty. I humbly beg your forgiveness. My mind was poisoned, and I was not myself.
I vow to make this up to you."

Note: This article is a stub. You can help by expanding it.
Retrieved from "https://en.uesp.net/w/index.php?title=ESO:General_Godrun&oldid=2115856"
Categories:
Hidden categories: