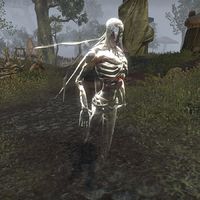 This article is about the hostile creatures. For the NPC spirits, see Spirit.

Ghosts are spirits of the deceased that have been trapped on Nirn. They are often found haunting tombs and graveyards. These enemies should not be confused with spirits — ghosts all look the same (except for varying in color), whereas spirits look like the person they were in life.

Ghosts are considered flying creatures, and thus roots and snares will not work on them.

Chill Touch
A short ranged spell that does moderate frost damage and slows the player down. The spell can be interrupted to set the ghost off-balance, but cannot be avoided.

Haunting Spectre
The ghost winds up and releases an apparition in the direction it is facing. Touching the apparition will do moderate frost damage, as well as fear the player, causing them to run around randomly for a few seconds. This spell can be interrupted to set the ghost off balance, or simply avoided.

This ESO-related article is a stub. You can help by expanding it.
Retrieved from "https://en.uesp.net/w/index.php?title=ESO:Ghost&oldid=2086403"
Categories:
Hidden categories: