The UESPWiki – Your source for The Elder Scrolls since 1995
< ESO: Places: Craglorn / Ruins / Trials
Jump to: navigation, search

When the warriors of the Ra Gada came to the shores of Hammerfell, some of the fiercest cohorts marched far inland in search of domains to claim. Hel Ra was one of the easternmost of these domains, but its gates were sealed long ago. 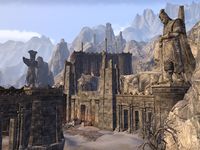 Hel Ra Citadel is an ancient Yokudan fortress in southwestern Craglorn. It has been taken over by The Warrior and his Anka-Ra armies, having been corrupted by The Serpent. 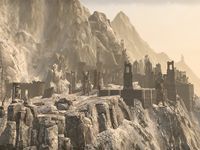 Hel Ra Citadel Hard Mode can be triggered by entering the Veteran version of the trial and destroying the statues in the room before the Warrior's chamber.

Completing a full run of Veteran Hel Ra Citadel will reward 12 Undaunted Plunder worth 12000 gold total (2 from Ra Kotu, 2 from Yokeda Kai or Yokeda Rok'dun, and 8 from The Warrior). You will receive a Star-Studded Champion's Baldric for defeating The Warrior with hard mode active.

There are 5 achievements associated with this location: