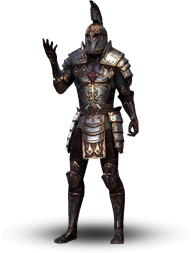 Also known as Cyrodiils, Cyrodilics, Cyro-Nordics and Imperial Cyrods, the well-educated and well-spoken Imperials are the natives of the civilized, cosmopolitan province of Cyrodiil. Imperials are also known for the discipline and training of their citizen armies, and their respect for the rule of law. Though physically less imposing than the other races, the Imperials have proved to be shrewd diplomats and traders, and these traits, along with their remarkable skill and training as light infantry, have enabled them to subdue all the other nations and races and erect the monument to peace and prosperity that comprises the Glorious Empire. Their hegemony has waxed and waned throughout the eras, and most historians refer to three distinct Empires, the ends of which each mark a new epoch in Tamrielic history.

The racial skills of the Imperials reflect their training and perseverance in battle, giving them bonuses to gold drop rates, shields, health, and stamina.

Imperials have an associated skill line that complements their lore-based abilities. Abilities are listed below. Notes