The UESPWiki – Your source for The Elder Scrolls since 1995
< Online: Places: Cyrodiil / Subzones
Jump to: navigation, search

At the center of Cyrodiil stands the Imperial City. There, the Three Alliances vie with Daedric overlords and each other for control of the White-Gold Tower. 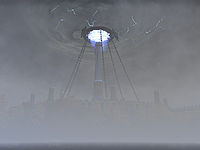 The Imperial City is the central city and capital of Cyrodiil and all of Tamriel. 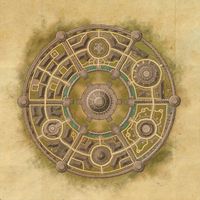 Map of the Imperial City districts

The bridges to the city are all blocked with impenetrable force fields, and attempting to swim across will only result in your quick demise due to the infestation of slaughterfish. Entry is available through the Alliance War menu to all players.

The Imperial City is divided between the Imperial Sewers and the six Imperial Districts. Each Alliance has a small base in the sewers which provides quick access to the districts, but getting back to base from the districts requires traversing the sewers. Gameplay within the sewers is similar to a large Public Dungeon with PvP, while the districts function as Quest Hubs and battlegrounds. Tel Var Stones are earned and used within the City, but can be lost by dying. The Imperial City also contains the entrances to two PvE Group Dungeons, although these are separate from the campaign.

Despite being located in the Imperial City, the Arcane University Battleground does not require the Imperial City DLC. It was originally part of the Morrowind Chapter, but was later made available to all players.

This ESO-related article is a stub. You can help by expanding it.
Retrieved from "https://en.uesp.net/w/index.php?title=ESO:Imperial_City&oldid=2120292"
Categories:
Hidden category: