This island off the south coast of Elsweyr is named after the Khajiiti goddess of weather and the sky, who is usually represented as a great hawk. She finds many worshipers among the cat-folk's sailors and farmers, especially those who grow moon-sugar cane. 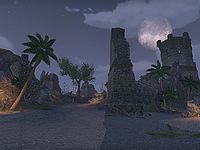 Eagle's Strand, the first sight when arriving on the island

Khenarthi's Roost is a small island off the coast of Elsweyr inhabited by both Khajiit and Maormer, named for the Khajiiti goddess Khenarthi. The island is dotted with moon-sugar plantations and is a location of both active Khajiiti worship and Maormer magic, as the Khajiit signed a peace treaty with the Maormer which allowed them to settle on the island. The island is under negotiations for inclusion in the Aldmeri Dominion, but the negotiations are being hampered by the existing Maormer treaty. Meanwhile, the Dominion are actively combating skooma production in the area.

The island is where Aldmeri Dominion players begin their journey after escaping Coldharbour. Over the course of the Dominion questline, you discover that a devastating storm recently hit the island; it is revealed the storm was conjured by the Sea Vipers, a group of Maormer who oppose the planned inclusion of the island into the Dominion. Broken ships litter the south and west sides of the island, and the village of Cat's Eye Quay, near the port city of Mistral, is almost completely gone.

Note: This article is a stub. You can help by expanding it.
Retrieved from "https://en.uesp.net/w/index.php?title=ESO:Khenarthi%27s_Roost&oldid=2091714"
Categories:
Hidden categories: