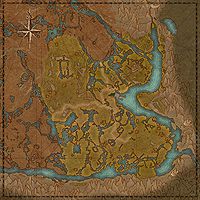 Leafwater is the southeastern region of Shadowfen. It is the site of the Hatching Pools, and the port city of Alten Corimont. The Forsaken Hamlet is also found north of the port, and the Percolating Mire is to the south. The Leafwater Dolmen is just south of that. The Reticulated Spine borders to the north, while the Venomous Fens are to the west.