The UESPWiki – Your source for The Elder Scrolls since 1995
< ESO: Places: Zones
Jump to: navigation, search

At the southernmost extremity of Black Marsh, the region informally known as Murkmire gradually slopes away from the interior uplands of the north until it fades into the ocean. Legend holds that the land once extended much further south before it sank beneath the waves. 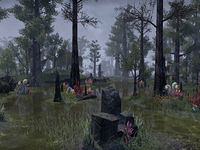 Murkmire is a region situated in southernmost Black Marsh, south of Shadowfen. The region is largely made up of marshland surrounding the Keel-Sakka River, and is home to the little-known Naga. The city of Lilmoth by the Oliis Bay can be found here, and the region is inhabited by various creatures, such as haj motas, kotu gava, and hackwings. There is also some exotic and previously unknown flora in the region such as catapult cabbages, scuttle blooms, static pitchers, and voriplasm.

Murkmire was released on October 22, 2018 on PC/Mac and on November 6, 2018 on PS4/Xbox One. It was available for free from the November Daily Rewards. A prologue to Murkmire became available to players on October 8th. In the prologue, you meet a society of relic hunters called Cyrodilic Collections. They will need your help in hunting down a dangerous Argonian relic before their competitors find it. The prologue contains two story quests and six repeatable quests.

Note: This article is a stub. You can help by expanding it.
Retrieved from "https://en.uesp.net/w/index.php?title=ESO:Murkmire&oldid=2095681"
Categories:
Hidden categories: