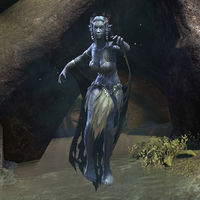 Nereids are mer-like, feminine water creatures. They are often found near bodies of water, such as rivers, lakes, and the sea. Leimenids are creatures closely related to nereids.

As nereids are considered flying creatures, snares and roots are ineffective against them. Nereids are weak to fire, thus using fire-based attacks against them may stun them briefly. They use various frost spells, and getting hit by their attacks may apply the "Chill" status effect. This effect does minor frost damage to the player and slows the player down for a short time.

Frost Bolt
The nereid throws a ball of ice at the player as a basic ranged attack. This attack does minor frost damage.
Water Geyser
The nereid causes a jet of water to appear beneath the player's feet, doing moderate frost damage. Move out of the red circle to avoid this.
Hurricane
The nereid creates a swirling vortex around itself, doing moderate frost damage over time to all enemies standing within the doughnut-shaped red area (i.e., only the area between the two concentric red circles actually does damage). This spell can be interrupted to set the nereid off balance, or simply avoided.

This ESO-related article is a stub. You can help by expanding it.
Retrieved from "https://en.uesp.net/w/index.php?title=ESO:Nereid&oldid=2099915"
Categories:
Hidden categories: