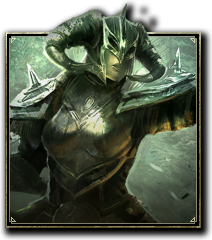 The Nords are the children of the sky, a race of tall and fair-haired humans from Skyrim who are known for their incredible resistance to cold and magical frost. They are fierce, strong and enthusiastic warriors, and many become renowned warriors, soldiers and mercenaries all over Tamriel. Eager to augment their martial skills beyond the traditional methods of Skyrim, they excel in all manner of warfare, and are known as a militant people by their neighbors. Nords were known for a time for their nautical prowess when they migrated from Atmora.

A list of all the Nords encountered in ESO can be found here.

The racial skills of the Nords reflect their strong and hardy natures, giving them bonuses to two-handed weapon use, duration of effects from drinks, resistance to incoming damage, base health, health regeneration, frost resistance, and stamina.

Nords have an associated skill line that complements their lore-based abilities, with a focus on their reputation as skilled warriors and their resistance to the cold. Abilities are listed below. Notes