The UESPWiki – Your source for The Elder Scrolls since 1995
< ESO: Places: Stormhaven / Elven Ruins / Delves
Jump to: navigation, search

It's unknown what these vaults were called by the Ayleids who built them. They acquired their current name when they were occupied during the Second Empire by the eccentric wizard Norvulk Tome-Hoarder. 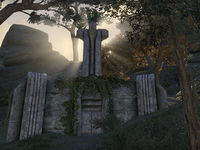 Norvulk Ruins is a ruin in the north of Stormhaven, north of Wind Keep containing Daedra. Dremora now take life out of this ancient place. Several texts dedicated to Vaermina can be found within the ruins: In Dreams We Awaken is near the entrance to the ruins and Dream of a Thousand Dreamers can be found in the northern part of the large open area. Just before entering that area, you can also read some orders for the followers of Vaermina. Lastly, Dreamers Our Time Has Come is found near the delve's boss, Nariam.

A heavy sack and a chest can be found in the northwestern corner of the room where you find Nariam.

Explore and clear the Norvulk Ruins.

To clear this dungeon and mark it as complete, you need to kill the following bosses: 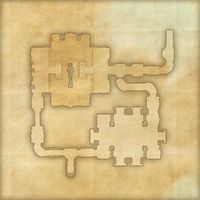 A map of Norvulk Ruins
Note: This article is a stub. You can help by expanding it.
Retrieved from "https://en.uesp.net/w/index.php?title=ESO:Norvulk_Ruins&oldid=2088468"
Categories:
Hidden categories: