The UESPWiki – Your source for The Elder Scrolls since 1995
< ESO: Places: Shadowfen / Ruins / Group Dungeons / Ruins
Jump to: navigation, search

As any Argonian will tell you, something at the heart of the "Puzzle City" is terribly wrong and deeply disturbing at a basic, almost organic level. Erect the spines of warning! 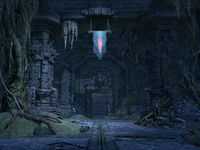 Ruins of Mazzatun is a group dungeon in Shadowfen. It's part of the Shadows of the Hist dungeon pack DLC, along with Cradle of Shadows. The ruins can be entered from a cave at Hei-Halai, west of Stormhold. 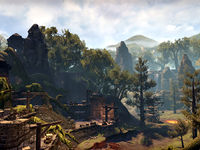 Similar to the Imperial City group dungeons, Mazzatun has an objective quest as well as a repeatable pledge from Urgarlag Chief-bane.

Its dungeon sets are Amber Plasm, Aspect of Mazzatun, and Heem-Jas' Retribution.