The UESPWiki – Your source for The Elder Scrolls since 1995
< ESO: Places: Reaper's March / Towns / Quest Hubs
Jump to: navigation, search 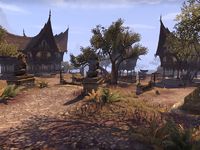 S'ren-ja is a small town in eastern Reaper's March, southwest of Dune. The town has extensive moon-sugar plantations to the north and south despite the dry conditions. The crops thrives due primarily to irrigation with ditches, wells, even changing the courses of the waterways. Partly due to this, it suffers of skooma smuggling problems and some of its inhabitants have become addicted to that drug. S'ren-ja used to have active river docks, but these are now abandoned and infested with crocodiles. Clanmother Shuzura rules the town from her estate, dealing with all those problems. 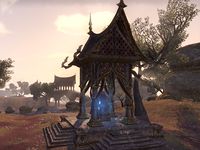 S'ren-ja Wayshrine is located in the hills to the north of the town.