This article is about the main island of Summerset Isles. For the Summerset chapter, see Summerset (chapter).

"The land called Summerset is the birthplace of civilization and magic as we know it in Tamriel. On its idyllic sea-kissed shores live the Altmer, the High Elves." 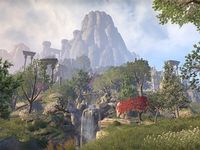 Summerset is a large island off the southwestern coast of mainland Tamriel.

The zone includes the entirety of Summerset Isle, the largest island of the Summerset archipelago. It is included with the Summerset Chapter of the game.

This ESO-related article is a stub. You can help by expanding it.
Retrieved from "https://en.uesp.net/w/index.php?title=ESO:Summerset&oldid=2065961"
Categories:
Hidden category: