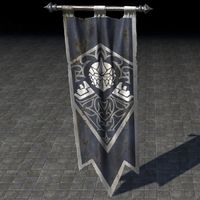 The Undaunted are a faction of dungeon-delving adventurers who set the scene for each of the Group Dungeons and Trials that can be found in the world. The locations of each of the base-game dungeons can be discovered by talking to Undaunted members within the tavern in the main city of each zone, while DLC dungeons become accessible upon unlocking the related DLC. Note that all dungeons and trials can be traveled to directly from a Wayshrine once you have learned their location. The Undaunted skill line focuses on group utility, and provides skills which aid allies in group combat as well as dealing wide-ranging damage. All of the abilities give the opportunity to activate synergy. To gain reputation with them, you must complete Dungeon Achievements (not including those in the Public Dungeons section), Pledges and delve dailies.

Delve Dailies are repeatable quests offered by Bolgrul, located at the Undaunted Enclave in each Alliance capital. These quests will send you to a specific delve in the world. Unlike pledges, these quests can be shared with your group, and thus it is possible to do up to 15 of these quests in a day per character. These quests will reward 10 Undaunted reputation, as well as small box of rewards. These quests are one way of obtaining the Draugr motif. 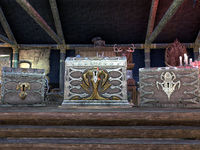 The old reward chests available at the Undaunted Enclave

The Undaunted Pledges are repeatable quests which become available at Level 45 from the Undaunted Enclave in your Alliance Capital, and task your group with clearing out a Group Dungeon on either normal or veteran difficulty. It is possible to complete up to three pledges per character per day, a different one offered by the three Pledge Masters at the Undaunted enclave.

Completing a normal or veteran mode Pledge will reward you with a key, while completing a Veteran Hard Mode pledge will reward two keys. The maximum number of keys that can be earned in a day per character is thus six. Each key can be spent at any of the Pledge Masters at the Undaunted enclave. Pledges rotate in a fixed order, and certain dungeons are associated with specific Pledge Masters as listed below. The three pledges offered are identical for all players and will reset daily.

Pledges marked with a

require the related DLC to be purchased from the Crown Store in order to complete. As of Update 12, these will only be handed out by Urgarlag Chief-bane, so players without access to the DLCs can easily avoid them by only getting pledges from Maj and Glirion.

These different types of keys unlocked different tiers of reward chests. The fact that Glirion gave out DLC-specific pledges meant that his pledge reward would essentially be blocked on those days for players without the DLC.

These old quests are listed below:

The Undaunted also offer rewards for completing random dungeons through the dungeon finder. Unlike pledges, there are no objectives to complete and no quest is given. The rewards and experience are automatically sent to you the moment the final boss of the dungeon dies. Completing the Daily event will grant Premium Undaunted Exploration Supplies. This event has a 20 hour cooldown per character, which means that any subsequent completion with the same character before the time is up will grant Undaunted Exploration Supplies. This is the same regardless of whether the dungeon is set to

The Undaunted have a meeting place in each of the major zones. They will give you the locations of Dungeons both in your own alliance's territory and the other two zones of corresponding level to where you meet them, allowing you to fast-travel to them even without being able to access the rest of the zone. Also, one member at each location will give you the option to buy them a drink. Doing so at each of these locations will earn you the This One's On Me achievement. Note that members of the Undaunted can be encountered at places outside the scope of this list.

All guilds use reputation for leveling purposes. Undaunted

Reputation is gained by completing Dungeons Achievements in the Group Dungeons, Veteran Dungeons, Trials, and General sections, as well as the Delve Daily achievements listed under Character Achievements. You gain 10

per completed achievement[verification needed], except This One's On Me which grants 30

on completion, and Dungeon Damage Dispenser which grants 40

for completing a Delve Daily, 10

for completing a Pledge on normal or veteran mode, and 20

for completing a Pledge on veteran Hard Mode.