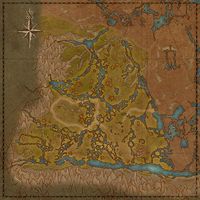 A map of the Venomous Fens

The Venomous Fens is the southwestern region of Shadowfen. Murkwater in the south is the largest settlement in the region. The White Rose Prison is located in the northern part. Most of the other locations are ruins of various types. The Venomous Fens Dolmen is located to the west of Murkwater. The Reticulated Spine region borders on the north, while Leafwater is to the east.