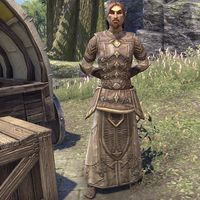 Vicereeve Pelidil is an Aldmeri Dominion diplomat. He can initially be found in Mistral, on Khenarthi's Roost, reluctantly working with the Silvenar to negotiate with the Maormer for control over the island. He is frank about his contempt for the quest for a peaceful resolution.

If he is spoken with in Mistral before being asked to help the Silvenar.

"This diplomatic mission is a farce. The Dominion should've taken Khenarthi's Roost by force, and sorted the rest out later."
You work with Prince Naemon?
"I don't work with him. I serve him! As you should. The prince is your better, and serving him is serving the Dominion.
Think about it."

Meeting him later in Vulkhel Guard before completing the local objective, he'll say, "Don't bother me, traveler. I must be ready to aid the Prince at a moment's notice."

As you approach the Chancery to speak to the Silvenar, Pelidil will catch your attention with his complaining:

Vicereeve Pelidil: "Is the Silvenar blind? Every one of these Sea Elves is a venomous serpent waiting to strike! We should've cleansed this place of Maormer scum the moment we arrived."

When you talk to him, his umbrage continues.

"Lorkhan take them all! Why does the Silvenar negotiate with these filthy Maormer?"
What do you have against Maormer?
"Those pirates are a stick in the High Elf eye! They capture our merchant ships and raid our settlements.
If I had any say, we'd negotiate with a sword at their throats!"
You don't have any say in the negotiations?
"Not as long as the Silvenar confuses diplomacy with capitulation!
He's inside with the rest of them, pretending this won't end in bloodshed. Go, see this farce for yourself!"

If you talk to him before informing Harrani of the Silvenar's death.

"Mistral will belong to the sea itself before we hand it over to the Maormer! This entire summit is a waste of time."

Pelidil: "The Silvenar, murdered? These treacherous Khajiit have plotted with the Maormer to slay our noble envoy!"
Harrani: "How dare you! The Silvenar was our guest. You go too far, Vicereeve!"
Ulondil: "Outrageous! More Dominion treachery. I will conduct my own investigation!"
Pelidil: "No sea-rat will show me up. I'll get to the bottom of this myself!"

He will not speak any more kindly to you:

"This is an outrage! I demand Ulondil be taken into custody!"
Why?
"Because this slimy Maormer had a hand in the Silvenar's murder! We should march on their embassy and put it to the torch this very moment
Oh, never mind. It's like I'm speaking to a ship's mast. Do continue your "investigation," would you?"

If you talk to him before confronting Ulondil about his part in the Silvenar's murder.

"This diplomatic mission is a farce. The Dominion should've taken Khenarthi's Roost by force, and sorted the rest out later."

After you confront Ulondil, the Maormer escapes.

Ulondil: "The tempest is coming. You cannot stop it!"
<Ulondil flees into the Embassy.>
Pelidil: "Sea-rat coward! I'll have your head for this!"
Green Lady: "I have his scent. And soon, his heart."
Harrani: "Stop, all of you! This madness ends now!"

Once your investigation has borne fruit, Pelidil is happy to have his preconceptions validated.

"I warned them. Warned them! But why would I know anything about Maormer treachery?
Maybe now they'll listen to reason. It only takes a murder, right?"

When you encounter Ayrenn's entourage camped just outside Tanzelwil, Pelidil will be accompanying Prince Naemon. He is quite upset by the delay:

"Such a waste of the Prince's time. That such a great man should be made to follow along after Ayrenn. Like a tamed hound!
Naemon is no hound. He is a wolf."

The Honor of the Queen[edit]

Talking to him before receiving the quest in the Elden Root throne room: "The prince is thoroughly engaged at the moment. Certainly too busy for the likes of you." After the Bosmer king directs you to talk to Prince Naemon: "You have business with the prince? Make it quick. I'll not have his time squandered on trivialties [sic]."

After settling the business with the embassy, he'll say, "Consider yourself grateful the prince granted you an audience. He attends to crucial matters of state."

The Orrery of Elden Root[edit]

When you first enter The Orrery, you'll hear Pelidil and Meleras arguing:

Vicereeve Pelidil : "Preposterous! I'm an Aldmeri vicereeve, an assistant to Prince Naemon himself! Why am I barred from the ceremony?"
Meleras : "The Orrery hasn't been activated in a millennia. It might work splendidly, yes. Or it might explode. But I'll speak with Daraneth if you insist on being present."
Vicereeve Pelidil : "I …. Upon consideration, I suppose I could wait by the door. To call for help, should anything go wrong."

Speak to him and he'll belittle the whole affair:

"There won't be much to see, I'm sure. The Ayleids were notorious for their glowing crystals, so I suppose there will be more than a few bright lights.
Sounds quite dreary. I can't imagine it will be worth your time at all."

Pelidil will hear the commotion of Naemon's betrayal and come running:

He stands in a corner, speaking of Andur:

"Andur has one of the little beggars in the field, away from the house."
"Aranias will demonstrate her talents on the other."

If engaged in conversation, he'll simply tell you that "I don't believe we've met. I'd prefer to keep it that way."

Teleport onto Pelidil's ship and he'll taunt you:

Towards the end of the quest, Hermaeus Mora directs you to activate the crystal to see a vision of Pelidil and Laryaril interrogating Saromir and the crystals for information:

Saromir: "Not another memory! My mind is full!"
Laryaril: "Are you sure we're not wasting our time? How many people has this crystal killed now?"
Vicereeve Pelidil: "Patience. Rest assured, Ilmyris contains the knowledge that Naemon's Shade will need."
Saromir: "No, the roots, they envelop the whole forest … and at the center, such pulsing … augh!"
Vicereeve Pelidil: "Pulsing. The heart. At last. Let me see."
Laryaril: "Wait! What are you doing? The crystal will drive you mad!"
Vicereeve Pelidil: "Magnificent! Such truth, such clarity of sight. Everything leads to Hectahame…."

Note: This article is a stub. You can help by expanding it.
Retrieved from "https://en.uesp.net/w/index.php?title=ESO:Vicereeve_Pelidil&oldid=2081547"
Categories:
Hidden category: