The UESPWiki – Your source for The Elder Scrolls since 1995
< ESO:Zone Guide
Jump to: navigation, search 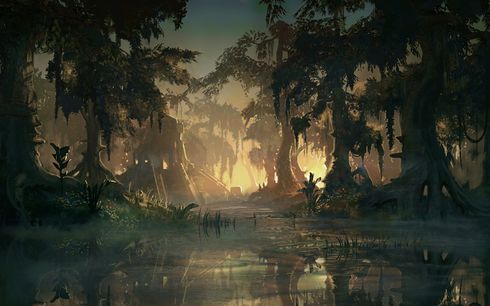 SHADOWFEN
On the border with Morrowind, the Shadowfen region has had more contact with Tamrielic civilization than most of Black Marsh—due primarily to the activities of the Dunmeri slavers who once operated out of the city of Stormhold. Now the Argonians are back in charge.

Zone Story Quests are the main story arc for the zone. Completing these quests can award you with skill points, experience, gold, and gear.

Wayshrines allow free, instantaneous travel between wayshrines that have been discovered and unlocked. You can also travel directly to any unlocked wayshrine from anywhere in the world for a small amount of gold.

Delves are solo-able dungeons found throughout the world. Delves will always contain a single skyshard and a boss who drops item set gear.

Points of Interest are self-contained stories that explore the lore, characters, and locations within a zone. These can award you with experience, gold, and gear.

Set Stations are locations in the world where you can craft items with specific item set bonuses.

Mundus Stones are objects in the world that grant a boon in the form of a temporary player buff. This buff will persist until replaced with a different Mundus Stone boon.

Public Dungeons are open world dungeons found throughout Tamriel and beyond. These are designed for four player groups. Completing different parts of Public Dungeons can award you with a skill point, experience, gold, and gear.

World Events such as Dark Anchors are activities that occur in the world that are best tackled by a group of adventurers. Completing a World Event can award you experience, gold, and higher tier gear.

World Bosses are difficult enemies meant to be tackled by a group of adventurers. Defeating a world boss can award you higher tier gear.

Skyshards are scattered throughout the world and can be identified by the bright beam of white light they emanate. Discovering three Skyshards will grant you a skill point, which can be used to unlock or morph new abilities.

Shalidor's Library Books are scattered throughout the world. These books are identified by their distinctive purple glow. Discovering these books will improve your Mages Guild rank and advance the associated skill line.