Race Against Time: The Apprentice[edit]

The Apprentice is a location available in Race Against Time and is unlocked directly after you enter this map. During your search to get into the Inner Curiosity, you'll get into possession of the a memory star and replay the moment that Mecinar solves Sotha Sil's last riddle to enter the Halls of Contemplation. Memory stars are puzzles that can only be completed by one specific order of actions in-game. Once you complete it for the first time, you'll receive a playset of Gearwork Spider and Mecinar's Will.

Sotha Sil: "I have had so many apprentices over the years. But I believe the man I met today has the potential to rival them all."

Mecinar: "Great Sotha Sil. Have I not shown I have the skills to enter the Halls of Contemplation?"
Sotha Sil: "You show much promise, Mecinar. Solve this last riddle, and I shall admit you."

Hello: "Good day, master."
Oops: "My intellect is sharper than that."
Good Game: "Excellent. I have learned much."
Nice Play: "Brilliance!"
Implore: "Grant me your wisdom, master."
Thank you: "You're too kind, master. It will be the death of you."
Taunt: "You will respect my genius!"
Sorry: "Forgive me if I've overstepped my bounds."

Sotha Sil: "The apprentice possesses a dangerous intellect. But to suppress such a mind would be a sin against potential, and a sin against Sotha Sil. 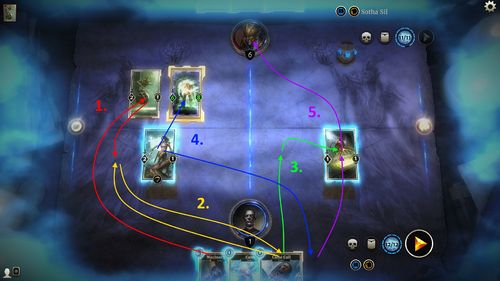 You start with 12 magicka and need to bring down the opponent's health to 0. 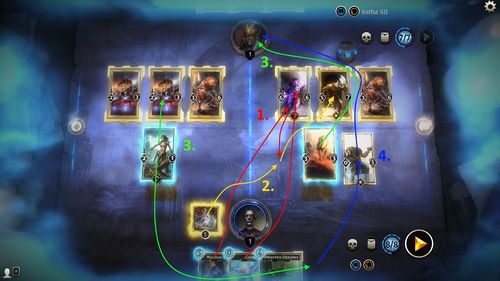 You start with 8 magicka and need to bring down the opponent's health to 0.