Race Against Time: The Betrayal[edit]

The Betrayal is a location available in Race Against Time. It is unlocked after you've beaten the Hall of Conveyance. After you survived the hordes of Dwemer constructs, you'll get into possession of the next memory star and replay Sotha Sil's confrontation with Mecinar after discovering the latter's experiments. Memory stars are puzzles that can only be completed by one specific order of actions in-game.

When you begin the battle, you'll be told that "Mecinar has confronted you in your workshop. Use the tools at hand to defeat him this turn."

Once you complete it for the first time, you'll receive a playsets of Kagouti Fabricant and Abandoned Imperfect, and will unlock The Inner Curiosity provided that The Red Mountain is complete as well.

Sotha Sil: "There was always a 47% chance that Mecinar would seek my power. But he has done far worse."
Sotha Sil: "Today I found his… test subjects. Acolytes modified against their will, merged with beasts through steel and sorcery. Beautiful in their way. But abominable. There was only one thing to be done."

Mecinar: "You would condemn me? Hypocrite! Fraud! This is what you strive for — The creation of the perfect life form!"
Sotha Sil: "You have misunderstood me, Mecinar

Sotha Sil: "I cast Mecinar out of the city. Now, I must rework the enchantments that seal the Chamber of Lorkhan — to ones that Mecinar could never break."
Laaneth: "There! I think I can see enough of the new enchantments in this memory to determine how to unravel them! Now we just need to find the chamber." 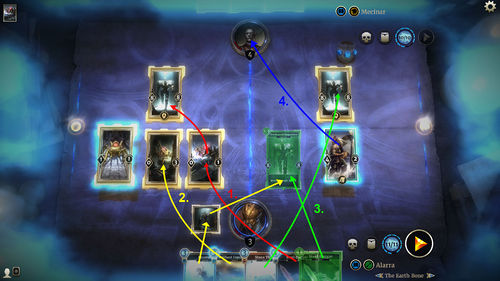 You start with 11 magicka and need to bring down the opponent's health from 4 to 0.

You start with 14 magicka and need to bring down the opponent's health from 12 to 0.