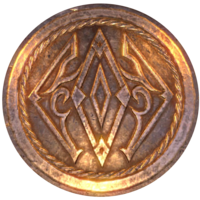 For the first Nordic Empire, see First Empire of the Nords.

The Alessian Empire, also called the First Empire,[1] the Empire of Cyrodiil,[2][3] and the Empire of Men,[4] was established by the former human slaves of the Ayleid Empire in 1E 243 following the Alessian Slave Rebellion.[5] The Empire traces its founding to the moment when Saint Alessia received the Dragonfires and the Amulet of Kings from Akatosh; she used the Amulet to drive the Daedra out of the mortal realm.[6] Akatosh told Alessia that as long as the Dragonfires remained lit and her heirs wore the Amulet of Kings, the gates of Oblivion would remain shut and Tamriel would be spared the depredations of the Daedra.[6]

Only a few rulers of the First Empire are now known: Queen Alessia, its founder and spiritual leader; Belharza the Man-Bull, Alessia's heir by her consort Morihaus, crowned in 1E 266; Gorieus, crowned in 1E 461; and Hestra, who expanded the reaches of the Empire all the way to High Rock in 1E 1029.[7] One of the defining events of the Empire was the rise of the zealously monotheistic Alessian Order, which followed the teachings of the prophet Marukh.[8] The Order's influence spread rapidly until, in 1E 361, its puritanical doctrines were formally adopted and enforced by the Empire.[9] Thereafter, the arch-prelates of the Order were said to wield almost as much power as the emperors themselves.[10] It was a sect of the Order called the Marukhati Selective that was responsible for the Dragon Break known as the "Middle Dawn".[11][12]

The Alessian Empire's territory fluctuated considerably throughout its history. At its inception it encompassed East Cyrodiil, including the Nibenay Valley and the White-Gold Tower, which later became the centerpiece of the Imperial City; West Cyrodiil remained a patchwork of independent Colovian kingdoms that resisted the Alessian Order's dogma.[8][13] A number of Ayleid vassal-states also briefly existed under the Empire's umbrella until the xenophobic Alessian Order methodically extinguished them.[9] Following the defeat and death of High King Kjoric the White in 1E 478, the Empire seized portions of southern Skyrim, but failed in its bid to acquire the Kingdom of Skingrad.[13] A westward expansion and attempt to annex High Rock was likewise thwarted at the Battle of Glenumbra Moors in 1E 482, which would be remembered as one of the Order's most disastrous mistakes.[14][15] High Rock would later be inducted into the Empire in 1E 1029 after the Empress Hestra defeated King Styriche, the Vampire of Verkarth, only to reassert its independence in 1E 2305 in response to the Alessian Order's excesses.[1]

The final days of the Empire arrived in 1E 2321, when tensions within the Alessian Order's bloated priesthood gave way to internal strife, prompting the kingdoms of West Cyrodiil to completely sever ties with the Empire and establish their own government, the Colovian Estates.[8] Hemorrhaging money and land, the Empire finally broke under the strain and the War of Righteousness erupted.[8] After a decade of violence that wiped out half of the population of the Iliac Bay[16][17] and saw the loss of the Order's extensive monastic complex at Lake Canulus,[18] among untold other atrocities, the war ended in 1E 2331 with the dissolution of the Alessian Empire and Order both.[8] Cyrodiil and Tamriel would remain divided until the rise of Reman I and the foundation of the Second Empire in 1E 2703.[8]