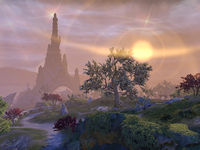 The Isle of Artaeum (/ɑrteɪʌm/ Ar-tay-um) is the third largest island of the Summerset archipelago, located off the southwest coast of Summerset Isle,[1] south of the Moridunon village of Potansa and west of the mainland village of Runcibae. Artaeum is the home of the Psijic Order, the oldest monastic group of Tamriel.[2] It has a tendency to vanish from Nirn, being placed in a pocket realm for centuries at a time.[3]

The Isle of Artaeum has idyllic orchards and clear pastures, still and silent lagoons, misty woodlands, and the unique Psijic architecture that seems to be as natural as its surroundings. The Ceporah Tower is a relic from a civilization that predates the High Elves by several hundred years.[2] It is the location of the Dreaming Cavern, which Sotha Sil once used as some sort of portal into the realms of Oblivion,[4] but which has since been sealed off by the Psijics.[5] The Isle of Artaeum was once removed from the world in a similar fashion to Umbriel,[6] but reappeared about 500 years later. The Isle of Artaeum once again disappeared around 100 years before the civil war in Skyrim, and has not been seen since.[7]

The Isle of Artaeum was home to Mannimarco, the leader of Necromancy in Tamriel.[8]