The UESPWiki – Your source for The Elder Scrolls since 1995
< Lore: Gods: A
Jump to: navigation, search 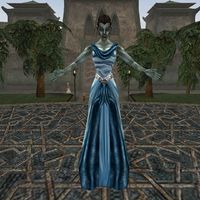 Azura of the Crimson Gate (also known as Azurah,[1][2] the Queen of Dawn and Dusk,[3] Mother of the Rose, and Queen of the Night Sky)[4] is a Daedric Prince whose sphere is dawn and dusk—the magic in-between realms of twilight[4]—as well as vanity and egotism.[5] She was also the Anticipation of Sotha Sil.[2] Azura is one of the few Daedra who maintains the appearance of being "good" by mortal standards, and presumably feels more concern for the well-being of her mortal subjects than other Daedric Princes.[6] She is one of the few Daedric Princes who constantly maintains a female image, and is perceived accordingly.[7]

Azura is the god-ancestor that taught the Chimer how to be different from the Altmer, though some of her more conventional teachings are sometimes attributed to Boethiah.[2] In the stories, Azura is often more a communal cosmic force for the race as a whole than an ancestor or a god.[2] She is considered an enemy of Ebonarm and Nocturnal.[8] She may be summoned on Hogithum, a festival on the 21st of First Seed.[6] In Elsweyr, Azura is sometimes perceived as nearly a wholly separate entity, known locally as Azurah.[2] She is credited with making the Khajiit out of the "forest people" living in Elsweyr,[1] indicating Bosmer, but some sources say the Khajiit were made out of "Altmeri stock".[2]

Although she is never overtly deceitful, the way Azura always gets what she desires in the end, and how titanic events always follow her interventions, can be portrayed as disturbing. Her followers acknowledge that she is "cruel but wise".[6] While she is considered one of the "good" Daedra by the Dunmer of Morrowind,[7] elsewhere she has been known to be allied with Molag Bal,[8] who is known to the Dunmer as one of the Four Corners of the House of Troubles.[9] The people of the Iliac Bay region believe that Azura bewitches some of her followers to become her "lovers" and "virtual slaves".[5] 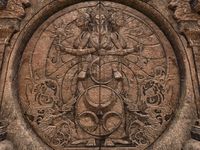 Depiction of Azurah as an Amalgamation of Khajiit, Mer and Human

Azura's Star is a Daedric artifact created by the Daedric Prince Azura. In appearance it looks like a large, intricately designed throwing star or gemstone, with eight star-like prongs. In the right hands, Azura's Star acts as a reusable soul gem of almost unlimited capacity. This makes it highly sought by mages and assassins. It can only capture white souls, but was once corrupted by mortals to trap black souls instead, becoming the Black Star. The Star is often used as a symbol of Azura.

Moon-and-Star is a Dwarven ring of Chimer hero Nerevar. The artifact was forged by one of the smiths of Dwemer Sorcerer-priest Kagrenac and blessed by the Daedric Goddess Azura. The ring lent Nerevar supernatural powers of persuasion and indisputable proof of identity, since any other who tried to wear it would be killed instantly. The Moon-and-Star helped Nerevar unite the warring Chimer clans, and form the First Council which included the Dwemer.

Moon-and-Star played a role in the Nerevarine Prophecies, as it allowed the Nerevarine, the reincarnation of Nerevar, to again unite the Great Houses and Ashlander clans, this time in the battle against the forces of Dagoth Ur.

The Moonlight Blade is a crescent moon-shaped blade associated with both Azurah and the extant Order of the Hidden Moon. This ancient Khajiiti order was said to have been gifted the blade by the Mother Goddess herself and were charged to guide, protect and redeem their people's souls—both pure and those corrupted by Namiira, the Moonlight Blade was considered sacred tool for this duty. While on its own the blade was a deadly weapon against the Dro-m'Athra, in the hands of those who knew the Order's secrets, the Moonlight Blade could cut through liminal barriers, both the mundane and those between worlds.

This Ring was bestowed to the Nerevarine in 3E 427 upon killing Dagoth Ur. Little is known about this artifact outside this event.[10]

Moonshadow is a realm of Oblivion, created and ruled over by Azura, the Daedric Prince of Twilight. The realm is so beautiful that visiting mortals are half-blinded. The realm contains flowers and waterfalls, majestic trees, and a city of silver. The wind smells of perfume, and the realm is known to have rain. Azura lives in a rose palace, and is welcoming to mortal travelers.