The UESPWiki – Your source for The Elder Scrolls since 1995
< Lore: Places: B
Jump to: navigation, search 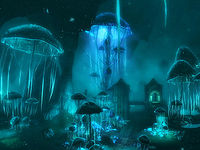 Blackreach, also called Fal'Zhardum Din ("Blackest Kingdom Reaches" in Dwemeris),[1] is an immense cavern located deep beneath the Pale and Winterhold in Skyrim. Many giant glowing mushrooms grow throughout the cavern, providing natural light. The cavern is rich in minerals, including rare geode veins, and a subterranean river flows through it. Originally settled by the Dwemer, Blackreach once served as an underground highway connecting several of their major cities in Skyrim. Following their disappearance, Blackreach has since become home to many dangerous creatures, including Giants, Frost Trolls, Chaurus, Falmer, and Wispmothers. The caverns are the only source of Crimson Nirnroot, a unique form of the common Nirnroot native to Blackreach.[2]

Blackreach was originally colonized by the Dwemer of Skyrim. They built Great Lifts to provide quick transport to the surface, and connected Blackreach to three of their settlements: Alftand, Mzinchaleft and Raldbthar. Irkngthand may also have contained an entrance, but it was no longer accessible as of 4E 201.[1] They constructed roads and buildings, culminating in the Silent City in the center of Blackreach. Dwarven Centurions were installed to guard the cavern's roads. The Dwemer farmed mushrooms in the damp environment. The Tower of Mzark, located in Blackreach, contained a device used to transfer the knowledge of an Elder Scroll onto a lexicon. Blackreach also acted as the lair of the dragon Vulthuryol.[2]

In the early First Era, the Dwemer took in the Snow Elves that were seeking refuge from the invading Nords after the Snow Prince was defeated. The Dwemer fed the Snow Elves fungi that grew in the caverns which rendered the Snow Elves blind. The Dwemer would later betray the Snow Elves by using them as slaves. The Snow Elves rebelled, overthrowing their Dwarven masters, and fleeing to the darkest corners of Blackreach. The cavern became the stage for the War of the Crag, a war fought between the Dwemer and Falmer for many decades. When the Dwemer disappeared from Tamriel in 1E 700, the devolved Falmer were free to spread throughout Blackreach.[3] Over the centuries, the Falmer came to inhabit the abandoned halls of their former masters. By taming the Chaurus, they were able to use its chitin to create primitive camps, many of which were set up in Blackreach.[2]

The cavern remained largely unknown to the surface-dwelling people of Tamriel outside of scholarly texts. An adventurer named Obeth Arnesian was the first outsider reported to have discovered Blackreach. During the Second Era, Crimson Nirnroot from Blackreach was prized for its rarity and its use in alchemy.[4] A Dominion scout named Vole fell down a shaft and ended up in Blackreach during the Alliance War. He managed to find a chaurus and ate it, but unknowingly consumed a soul gem in the process and gained an innate ability to tinker with machinery, fixing one of the great lifts and leaving the ruins.[5] A Crimson Nirnroot specimen was housed in the Aldmeri Dominion vaults in Marbruk circa 2E 582.[6]

In 4E 58, the master alchemist Sinderion arrived in Blackreach to study the Crimson Nirnroot, having been directed there by Obeth. The Crimson Nirnroot was a variant of the common Nirnroot found exclusively in Blackreach, where it grows symbiotically with the cavern's mushrooms.[7] Sinderion set up a field laboratory in one of the abandoned Dwemer houses, but he was then murdered by one of the still-functional Dwemer animunculi.[2]

In 4E 201, the scholar Septimus Signus sent the Last Dragonborn to Blackreach on a quest to retrieve the Dwemer's Elder Scroll. The Dragonborn also uncovered Sinderion's remains, and by collecting several samples of Crimson Nirnroot, was able to continue his research. Through use of the Thu'um, the Dragonborn awoke Vulthuryol. The two did battle, and the Dragonborn absorbed the dragon's soul.[2]