The UESPWiki – Your source for The Elder Scrolls since 1995
< Lore: Places: D
Jump to: navigation, search 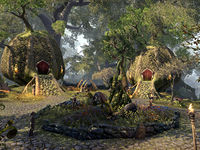 Deepwoods is a village located east of Velyn Harbor, in the Broken Coast region of Malabal Tor in Valenwood. It is a Bosmer village, consisting entirely of graht-oak pod homes. It is notable for being the birthplace of many incarnations of the Green Lady. The village contains a shrine to the Green Lady, as well as many sacred sites associated with the early lives of the Green Ladies.[1]

Finoriell was born in Deepwoods at some point in the Second Era and later went on to become the Green Lady. Her niece Gwaering became the next Green Lady after Finoriell's death in 2E 582. That same year, Gwaering's sister Lanwaen was kidnapped from the village by the Houndsmen, a group of Hircine worshippers who served Ulthorn the Hound. Lanwaen was subsequently rescued by the Vestige.[1]

This Lore-related article is a stub. You can help by expanding it.
Retrieved from "https://en.uesp.net/w/index.php?title=Lore:Deepwoods&oldid=2121024"
Categories:
Hidden categories: