The UESPWiki – Your source for The Elder Scrolls since 1995
< Lore: Places: F
Jump to: navigation, search 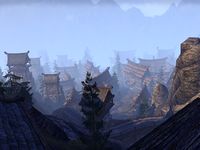 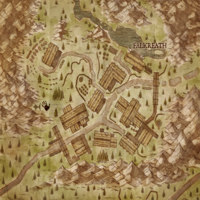 Falkreath (also called Falcrenth[1] or Falcreath)[2] is one of the nine major cities in the province of Skyrim,[3][4] serving as the capital of Falkreath Hold and the boreal forest. The city is widely-known as the "heroes' graveyard," many great battles took place here for centuries, and countless warriors were buried here, leaving behind graves and monuments to them.[5] Because of the nature of the city, the merchants of Falkreath are known to reflect the melancholic themes of death in their business.[6]

Falkreath lies in the southern forests of Skyrim, on a strategic crossroad in the middle of its respective hold and the provincial border towards Hammerfell's wilder country, the Dragon's Teeth Mountains.[2] It is built in the forest basin between the Jerall Mountains and the highlands that contain the Shriekwind Bastion, where a small lake forms at the base, suited for a mill in this lumber-town. It is a city that is heavily reliant to the lumber industry, due to the abundance of resource around them.[6] In the Second Era, Falkreath was much larger in scope. The jarl's longhouse once overlooked the town from the hills in the south, while the original Hall of the Dead was kept underneath the mountains. Nowadays, the current hall was a single home for the priest, as they tended to the expansive graveyard in the city's northern section. The jarl's longhouse is stationed in the dead center of the city, on the main road that runs through Falkreath. The land outside of the city is largely unpopulated, but beyond the western gate, the Dark Brotherhood sanctuary was found just off the road. The Nords of Falkreath are known to master the ability to tame Sabre Cats, who are considered much more feral and wild than the Senche-Cat.[7] Falkreath is neighbored by several settlements, including Neugrad Watch to the northeast, North Keep to the far north, and Hammerfell to the west towards Elinhir.[4][8] 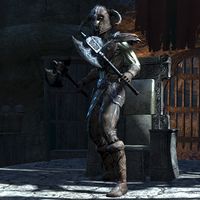 Falkreath was founded by the ancient warrior, Bjarfrud Skjoralmor, who drove out the beastly inhabitants and cut down the great forest to build the modern-day settlement.[9] But despite his human heritage, the town's name originates from the elven languages, though its translation is currently unknown.[10] The name, however, bears a strong resemblance with a tribe of Nedes known as the Men-of-'Kreath.[11] Regardless, the warrior's lineage became part of the hold's legacy. But what really cemented the city's longevity was how it represents the province's grand history. Many battles occurred here for countless centuries, and many graves and monuments were built to commemorate the fallen. Because of this, a village grew around it, and it evolved into a hold capital.[5] Falkreath has been an established government since the War of Succession and its destruction paved the way for Olaf One-Eye's ascension to the High Kingship in 1E 420.[12] A statue once stood commemorating the spot where Kjoric the White fell in battle defending Falkreath from the First Empire, local legend has it that his son, Hoag Merkiller, fell in exactly the same spot when he retook Falkreath years later[10], however, he was known to have actually fell in the Battle of Glenumbra Moors.

Falkreath has a distinct history with the western-realm of Colovia, often moving between the estates of Cyrodiil and the holds of Skyrim. The earliest account of this was during an interregnum between the First and Second Empires when the Colovian nations had split apart from each other and their leaders became thief-barons and petty-kings. That was until the arrival of Reman I and the formation of his Empire, although Falkreath's part during this time is unknown.[13]

Many years later, the province of Skyrim was part of the Second Empire, as far as the Akaviri Potentate, under the leadership of High King Logrolf. But with his death in 2E 431, a schism formed between the east and west of the province. The Western Kingdom of Skyrim (which included Falkreath) followed High King Svartr, who ruled from his domain, Solitude.[14][15] 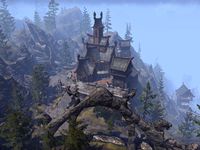 The Skjoralmor Clan has ruled over the Jarldom of Falkreath as far as the mid-Interregnum, under the reign of the western kingdom. When the Imperial Province of Orsinium was sacked in 2E 431, it displaced many Orsimer, who in turn fled to Skyrim and formed a large chiefdom under Yashnag gro-Yazgu. The chiefdom was considered the height of Orcish power in Skyrim and it was stationed in western Falkreath, often harassing the hold capital. High King Svartr was unable to stop the threat it imposed, which ultimately led to the death of the Jarl of Falkreath. His son Hakkvild took his place and challenged Yashnag in a ritual of combat. In the end, Hakkvild had slain the Orcish chief and garnered the title "Yashnag-Slayer". His victory led to the dissolution of the chiefdom and their return to the Wrothgarian Mountains in 2E 467.[16]

During Kurog gro-Bagrakh's consolidation of power, he planned to reestablish the Orcish kingdom in Falkreath and create an Orcish city to rival Wayrest. During this period, Kurog's forces were accumulating in the Druadach Mountains, ready to take Falkreath, however, the Nords held them back. Kurog gave this plan up after becoming allies with King Emeric.[17]

In the years prior to the Alliance War in 2E 582, Falkreath was ruled by Jarl Hjurgol Skjoralmor, who did not act justly in the days leading to the sacking of Falkreath.[18] The Dreadhorn Clan, an alliance of Reachmen and Minotaurs, orchestrated an assault on the city, under the command of Domihaus the Bloody-Horned. The Jarl took to hiding in his longhouse, while his daughter and thane, Eerika Skjoralmor, led the remnants of the resistance.[19] She held the town for some time until the intervention of the Undaunted, who delved through the battlefield and aided the Thane in their efforts to save the city. The group was able to defeat Domihaus at the Jarl's Keep and witness the coronation of Jarl Eerika.[20]

Falkreath in the Third Empire[edit]

In the latter years of the Interregnum, Falkreath was once again part of the Colovian Estates, under the command of the Far Falkreath Estate, a merchant clan that maintained ties with the holds of Skyrim.[21] The Colovian Estates were once again split into petty-kings and warlords, while the divided kingdoms of Skyrim had dissolved. King Cuhlecain of Falkreath sought to unify the estates but in order to move forward, he needed to secure his northern border, towards the Reach. His prized general, Hjalti Early-Beard, led his forces at the Battle of Old Hrol'dan, but as the siege proved that breaking the walls was impossible, the next morning he used his Thu'um to obliterate it and win the battle. With this newfound power, King Cuhlecain unified the west and conquered the east, preparing to proclaim himself Emperor. But he was later assassinated and Hjalti, now known as Tiber Septim, was named the Emperor. What followed was the Tiber Wars.[22]

During the Imperial Simulacrum in the late-Third Era, the city-state of Falkreath was an active settlement. It was ruled by King Bjeld, and it had a rivalry with Whiterun.[1]

Many years later, Dengeir of Stuhn served as the Jarl of Falkreath in the years the preceded Skyrim Civil War. He was encouraged by many people to step down as the Jarl when he supported the Stormcloaks, as opposed to the Third Empire.[23] It was given to his nephew, Siddgeir, who was known to be arrogant yet loyal to the Empire, although it was his steward Nenya that fulfilled the role as leader much more than him.[5] Legate Skulnar commanded the Imperial Legion throughout Falkreath Hold, and the stronghold of Fort Neugrad was a vital position for Falkreath's allegiance in the civil war.