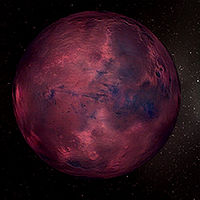 The greater of Nirn's two moons, Masser, or Jode, is acknowledged as one of the attendant spirits of the mortal plane, and, as such, is both temporal and subject to the bounds of mortality. Masser, which exists as a separate plane, has long since perished; it was Masser's death which led mortals to perceive it as having both texture and limited size, as well as a reddish hue, all of which are the results of its decay from its former investiture of pure white.

While regarded by various cultures as an attendant spirit of their god planet, minor god, or foreign god, Masser is not displayed within Dwemer orreries, neither does it hold a position within the pantheon of Imperial gods. In Khajiiti culture, walking the Path of Jode is a necessary step for a Lunar Champion seeking to become the Mane. Under the influence of moon sugar vapors, the Moon Hallowed guides the Lunar Champion through an aspect of Masser known as the Demi-Plane of Jode, which shapes itself to show visions of the future to those who walk along the path.[1]

Masser received its title from the Aldmer, who knew the plane as Jode ("Big Moon God" in Ehlnofex). Similarly, Masser finds itself invested with a position of authority and reverence among the Khajiiti pantheon, as its phase at the time of their birth — along with that of Secunda, the lesser of Nirn's moons — determines their form.

The Lunar Lorkhan suggests that Masser originated as one of the halves of Lorkhan's "flesh-divinity", cast within the bounds of Nirn at the time of his destruction, and thus, is a personification of the dichotomy that Lorkhan legends often rail against: ideas of good versus evil, being versus nothingness, and so on. It is believed that Masser was thus purposefully set in the night sky as Lorkhan's constant reminder to his mortal issue of their duty.[2]