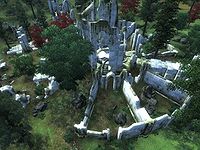 Miscarcand is an Ayleid ruin found amidst the West Weald, in the province of Cyrodiil. The largely-intact exterior of the ruin is one the biggest in Cyrodiil. It has two deeper subsections named Sel Vanua and Morimath which translate to "Hall of (?)" and "Darkened Home" respectively.

Miscarcand was once the seat of power for a powerful Ayleid kingdom, but it has since fallen into disrepair following the Alessian Slave Rebellion. It is said to be haunted by their last king, a vengeful spirit who also guards one of the few remaining Great Welkynd Stone, that continued to shine in its halls for many years. Many would die in their vain attempt to claim the Great Welkynd Stone from Miscarcand.[1]

During the Oblivion Crisis in 3E 433, the ruins of Miscarcand were occupied by the Bitterfish Tribe of Goblins.[2] There was a great attack planned for the city of Bruma, by the Daedric Hordes of Mehrunes Dagon, and in order to dispel the Great Gate of Oblivion, Martin Septim had required various artifacts. One such artifact was the Great Welkynd Stone, which was essentially one of a kind at this time. Martin had sent the Hero of Kvatch to Miscarcand to acquire the stone, as the ruins were their only choice. Successfully, the Hero of Kvatch was able to obtain the Great Welkynd Stone, and avert destruction towards Bruma.[3]