The UESPWiki – Your source for The Elder Scrolls since 1995
< Lore: Gods: N
Jump to: navigation, search 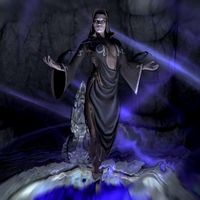 Nocturnal, who is also known as the Night Mistress[1][2][3] and Noctra to the Khajiit[4]—among other titles[nb 1]—is a Daedric Prince, or "Daedric Princess",[5] whose sphere is the night and darkness.[1][2] She is associated with, and often depicted alongside, jet-black ravens and crows, which are said to have the power of speech.[6]

The Gray Cowl of Nocturnal[edit]

The Gray Cowl of Nocturnal is a daedric artifact that once belonged to Nocturnal. It takes the form of a dark leather cowl, which obscures the face of the wearer. Nocturnal is revered as a god by thieves across Tamriel. Her reputation as the Mistress of Shadows has sometimes led thieves to attempt to steal an item from her to prove their greatness. As Nocturnal is usually depicted wearing a cloak and a cowl, it is around these two items that legends have arisen. The story of the theft of Nocturnal's cloak is probably fiction, as is at least one story of the theft of the cowl, but the cowl is known to have left her possession. It appears to have been stolen by a thief named Emer Dareloth, the first guildmaster of the Thieves Guild, although a curse bestowed upon the cowl by Nocturnal meant that the name of cowl's owner is lost to mortal memory. "Whosoever wears it shall be lost in the shadows. His true nature shall be unknown to all who meet him. His identity shall be struck from all records and histories. Memory will hide in the shadows, refusing to record the name of the owner to any who meet him. He shall be known by the cowl and only by the cowl." This curse was broken when history was rewritten through the use of an Elder Scroll.

The Skeleton Key (also called the Skeleton's Key) is a Daedric artifact created by the Daedric Prince Nocturnal. In Khajiiti myths, it is attributed to being originally Azura's. After Boethiah defeated Nocturnal, she was brought forth to be judged by Azura. She was spared as long as she promised to serve Azura and the ja-Kha'jay. Instead, when the opportunity was right, she stole the Skeleton Key from Azura and fled into the void. In appearance, it doesn't always take the form of a key, and sometimes manifests as a lockpick instead. In its key form, it can be used to unlock any lock. As a lockpick, it is nigh unbreakable and can get past even the toughest locks. The two limitations placed on the Key by wizards who sought to protect their storehouses were that the Key could only be used once a day and it would never be the property of one thief for too long, eventually disappearing.

The artifact functions as a tool for "unlocking" all things, including portals, hidden potential, and other unknown possibilities. Its ultimate function, however, is to unlock and hold open the Ebonmere, a portal to Nocturnal's realm, Evergloam, located in the Twilight Sepulcher of Skyrim. The Nightingales are tasked with guarding the Sepulcher and retrieving the Key should it be stolen. Unfortunately, the Prince is said to allow the Skeleton Key to be stolen or lost periodically, whether by purpose or apathy.

The first supposed wielder of the Key was the thief Arrovan. After disappearing, the Key always chose inaccessible places to hide, and for the benefit of historians Arrovan made a list of the various resting places.

The Bow of Shadows is a Daedric artifact that, according to legend, was forged by the Daedric Prince Nocturnal. The legendary ranger, Raerlas Ghile, was granted the Bow for a secret mission that failed. The Bow was lost, though Raerlas is said to have used it to take scores of his foes down with him. The Bow is said to grant the user invisibility and increased speed. Many sightings have been reported; it is said that the Second Era Dunmer assassin Dram once wielded it. Dram likely used the Bow during the Battle of Hunding Bay, when he shot Prince A'tor with the poisoned arrow that eventually killed him. Dram also made use of the bow during the rebellion of Stros M'Kai, led by the Restless League, most notably in battle against Cyrus the Redguard.

Near the end of the Third Era, the Bow came into the possession of a necromancer named Goris the Maggot King. In 3E 427, the Nerevarine killed Goris and his accomplice Luven in the Venim Ancestral Tomb, a tomb in the Grazelands of Vvardenfell which Goris used as a lair. The Nerevarine then retrieved the Bow. Later that year, the Bow was sold to Torasa Aram and put on display in her Museum of Artifacts in Mournhold.

The Evergloam is a realm of Oblivion, created and ruled over by Nocturnal, the Daedric Prince of Shadow. It is a realm of perpetual twilight, and the "cradle of shadow". The Evergloam consists of a primary plane and several pocket realms, including the Shade Perilous and the Crow's Wood. These realms are thought to be constantly shifting, and perceived differently by different mortals.

The Ebonmere is a portal linked to the Evergloam, which acts as Nocturnal's conduit on Tamriel. It is located in the Twilight Sepulcher, an ancient temple in Skyrim. The Ebonmere is held open by the Skeleton Key, although the artifact has often been stolen from the Sepulcher by mortals. The Nightingales are a secretive subgroup of the Thieves Guild, who pledge their souls to Nocturnal and guard both the Ebonmere and the Skeleton Key. When a Nightingale dies, it is believed that their soul becomes one with the shadows. As long as the Ebonmere remains open, the souls of dead Nightingales can "walk with the shadows" and bring luck to thieves. As Agents of Nocturnal, Nightingales are permitted to "drink" from the Ebonmere and obtain powerful abilities.