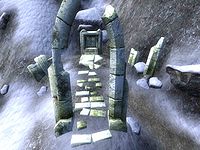 Sedor at the end of the Third Era 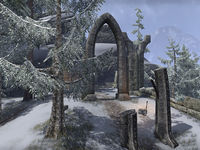 Sedor was an Ayleid settlement located high in the snowy Jerall Mountains, on the Cyrodiil side of the border. The Ayleid inhabitants once abducted a famous human tribe (the "Thousand Strong of Sedor", whose true name was forgotten with time). Pelinal Whitestrake won back this tribe from slavery.[1] The settlement was later abandoned by the Ayleids and fell into ruin.

Circa 2E 582, the entrance to Sedor was sealed, and the exterior ruins were defended by three ghostly Ayleid guardians.[2]

In the late Third Era, the ruins were home to a tribe of savage ogres.[3] In 3E 433, the ogres attacked a band of thieves who had stolen the Stone of St. Alessia from the Great Chapel of Talos in Bruma. The stone was said to have been blessed by Alessia herself, and protected the chapel from harm. The ogres, attracted to the pretty gem, took the stone and killed most of the thieves, leaving a single survivor. The Fighters Guild were called in to recover the stone from the thieves, and the guild member successfully tracked the ogres back to Sedor, wiped them out and retrieved the stone.[3]