The Third Empire was declared by Tiber Septim in 2E 854 after the chaos of the Interregnum, and was forged through a decades-long conflict to unite Tamriel known as the Tiber Wars.[1] It lasted throughout the whole of the Third Era and two centuries into the Fourth Era, when it began to decline. 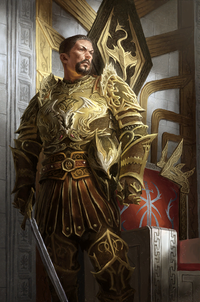 The Septim Dynasty was founded by Tiber Septim upon using Numidium to conquer the whole of Tamriel, after which he declared the start of a new era, 3E 0.[2] His rule of 38 years was prosperous and relatively peaceful. His grandson Pelagius succeeded him, and was poised to continue the golden age, until he was assassinated by the Dark Brotherhood after less than 3 years.[2] Pelagius was the first and only direct descendant of Tiber Septim to rule, as he was an only child and had no children himself. Thus, the Ruby Throne passed to Tiber's niece, Kintyra, in 3E 41. Kintyra and her son, Uriel, were successful rulers who achieved a level of unity within the Empire that would not be equaled for centuries.[3] Uriel II, who took the throne in 3E 64, had his 18-year reign blighted by plagues and insurrections, and accomplished little during his rule. Instead, he left many problems, and a great deal of debt, to Pelagius II. In response, Pelagius dismissed the entire Elder Council and allowed only those who paid a princely sum to return to their seats. While this tactic brought some prosperity back to Tamriel, it ended when Pelagius was poisoned in 3E 98, purportedly by a disgruntled former Council member.[4] His son, Antiochus, was more interested in debauchery than politics, known across the Empire as a womanizer even before taking the throne. His reign was marred by civil war and other conflicts, and the province of Summerset was almost lost to invading Maormer in 3E 110. Antiochus died ten years later, leaving the throne in the tenuous grasp of his 15-year-old daughter, Kintyra II. The succession was contested by Antiochus' siblings and would lead to civil war.[5]

In 3E 121, Kintyra II was imprisoned by Potema Septim, the infamous Wolf Queen of Solitude, and murdered two years later. This triggered the War of the Red Diamond, a civil war between Potema and her son Uriel III on one side, and Potema's brothers Cephorus and Magnus on the other. The armies of the brothers were eventually victorious and the succession continued.[4][6]

The Empire gained and lost power and land unpredictably during the next century until the rise of Katariah Ra'Athim. The first (and only) Elven ruler of the Empire, Katariah was the first in 100 years to secure a steady, iron grip over most of Tamriel, save Black Marsh. Ultimately, this would be the Empress' undoing, as she died in 3E 200 in a minor skirmish in Black Marsh.[7]

Another civil war broke out after the Elder Council voted to disinherit Andorak, the eldest son of Uriel IV, and offer the Imperial crown to his cousin Cephorus instead, as they considered Cephorus to be more closely related to the true Septim bloodline. The war lasted nine years until Andorak was mollified by the offer of the throne of Shornhelm in High Rock.

In 3E 268, Uriel V began his invasion of Akavir. This one invasion dominated his reign, and ultimately ended it. His life was cut short in 3E 290, and again the Empire began a slow decline.[8][9] Uriel VI was unable to take the throne until 3E 307, due to his young age at the time of his father's death, and his mother Thonica's attempts to stay in power as Regent. When Uriel VI fell from his horse and died in 3E 313, his half-sister came to power as Empress Morihatha. Uriel VI had left his sister with rebellious vassals and malcontent citizens to deal with. Nonetheless, she acted decisively and by the end of her reign in 3E 339, Tamriel was nearing a sort of unity. Her nephew, Pelagius IV—though struggling at first—brought the Empire closer to unity than it had been in over 300 years, since the days of Uriel I.[3]

Uriel Septim VII, son of Pelagius IV, came to power after his father's death in 3E 368. In 3E 389, Uriel VII's battlemage, Jagar Tharn, managed to imprison the emperor in a dimension of Tharn's own creation. For ten years, later known as the Imperial Simulacrum, Jagar Tharn ruled in Uriel's place, but showing none of the latter's wisdom. Before Tharn could entirely drive the Empire into the ground, Uriel was rescued and restored to the throne in 3E 399.[6]

During Uriel Septim VII's reign, which lasted 65 years, he united the Empire for the first time in centuries. By the end of the Imperial Simulacrum, Warp in the West, and Vvardenfell Crisis, the Empire was even closer to unity than at the end of Pelagius IV's reign. After his assassination, his son, Martin Septim, ended the Oblivion Crisis, the Third Era, and—with no more heirs—the Septim dynasty.

The Empire recovered from Tharn's deceit, but ultimately ended when Martin Septim sacrificed himself in a successful bid to seal the rift that had been opened to Mehrunes Dagon's plane of Oblivion. High Chancellor Ocato became Potentate Ocato when no candidate to replace Martin could be found. Ocato kept the Empire more or less intact in the tumultuous years after the Oblivion Crisis, but was assassinated in or around 4E 10, which ushered in the seven-year Stormcrown Interregnum.[10]

At some point in the seven years following Ocato's assassination, a Nibenese witch-warrior named Thules the Gibbering was crowned Emperor, although he was not well liked by the people, the Elder Council favored him over Titus Mede, a Colovian warlord who sought the throne. Eventually, in 4E 17, Titus Mede captured the Imperial City from Thules and crowned himself the first Emperor of a new dynasty, eventually persuading the Elder Council to accept him as a liberator rather than a conqueror.[10][11]

During his rule, the province of Hammerfell was reclaimed, alongside the city-states of Leyawiin and Bravil. Under later events, Elsweyr was also reclaimed.[10][11]

In 4E 168, Emperor Titus Mede II ascended to the throne. The Empire was at that time a shadow of its former glory. Valenwood and Elsweyr had been ceded to the third Aldmeri Dominion[10], Black Marsh had been lost to Imperial rule since the Oblivion Crisis, Morrowind had yet to fully recover from the eruption of Red Mountain, and Hammerfell was plagued by infighting between the Crown and Forebear factions. Only High Rock, Cyrodiil, and Skyrim remained prosperous and peaceful.[12]

In 4E 171, the Great War began when armies from the Aldmeri Dominion invaded the Imperial provinces of Hammerfell and Cyrodiil after Titus II rejected an ultimatum to make massive concessions to the Thalmor. An army led by Thalmor general Lord Naarifin emerged from hidden camps in northern Elsweyr and assaulted southern Cyrodiil, flanking Imperial defenses along the Valenwood border. Leyawiin fell to the invaders, and Bravil was surrounded and besieged. Simultaneously, an army under Lady Arannelya crossed western Cyrodiil, bypassing Anvil and Kvatch and entering Hammerfell. This army was joined by smaller forces landing on Hammerfell's coast. Imperial troops were forced into retreat across the Alik'r Desert. The Imperial City was besieged, and fell after the Emperor fled with the remnants of his army to Skyrim. The war ended a year later with the liberation of the Imperial City after the Battle Of The Red Ring, and with the subsequent Imperial acceptance of the White-Gold Concordat. This treaty contained terms almost identical to those rejected before the war, specifically the outlaw of Talos worship, which became one of the major causes of the Stormcloak Rebellion in Skyrim. Hammerfell seceded from the Empire and worked to combat Thalmor forces on its own, gaining its freedom in 4E 180. This left the Empire in a diminished and less stable condition, though it retained control of the provinces of Cyrodiil, High Rock and Skyrim.[12]

In 4E 201, the Stormcloak Rebellion broke out in Skyrim. The belligerents were the Stormcloaks, led by Ulfric Stormcloak, who fought for the independence of Skyrim, and the Imperial Legion, led by General Tullius, with the intention of holding the Empire together in the face of growing political tensions between them and the Thalmor.[13]