The UESPWiki – Your source for The Elder Scrolls since 1995
< Morrowind: Places: Daedric Ruins
Jump to: navigation, search 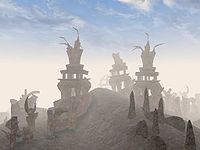 Note that there are two unconnected areas in this shrine. The shrine area has two entrances, and the other area has one. Three Altmer and a few dead scamps infest this shrine in the Ashlands. One of the Altmer, Earmil, wears one of the Sanguine items wanted by the Morag Tong. The diamond on the altar is cursed. 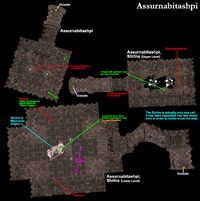