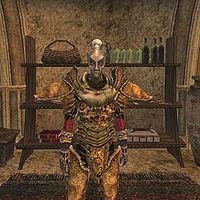 Banden Indarys is a Dunmer warrior who will take up residence at Indarys Manor after you have built your stronghold for either House Hlaalu or House Telvanni (he won't appear if you belong to House Redoran). In either case, you will be instructed to kill him.

Aside from his natural resistance to fire and the sanctuary provided by his ancestors, he knows no spells.