"Bittergreen is a red flowering plant with modest magical properties. It grows in the Red Mountain region."

Bittergreen Petals are a plant which grow abundantly in the West Gash region, and in lesser quantities in the Ashlands and Red Mountain regions. Contrary to the description, neither the plant nor its flowers are noticeably red in color. It usually appears as a thicket of several vines, which can contain from 0-3 petals. Some vines never contain petals. The thickets will often be found surrounding a pod-like center. This pod has one interesting quirk. Unlike most plants, it is a usable container. Only weightless items can be stored in a bittergreen pod, since it lacks storage capacity.

A special variety of Treated Bittergreen Petals is involved in Mephala's Quest. It has the same effects but in a different order.

The following vendors keep a restocking supply of Bittergreen Petals: 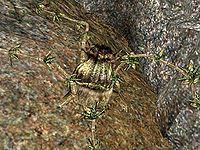 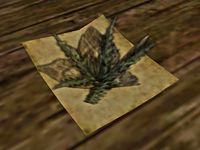