The UESPWiki – Your source for The Elder Scrolls since 1995
< Morrowind: Races
Jump to: navigation, search 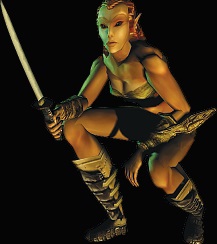 The Bosmer are the Elven clan-folk of Valenwood, a forested province in southwestern Tamriel. In the Empire, they are often referred to as Wood Elves, but Bosmer, Boiche, or the Tree-Sap people is what they call themselves. Bosmer rejected the stiff, formal traditions of Aldmeri high culture, preferring a more romantic, simple existence in harmony with the land and its wild beauty and creatures. They are relatively nimble and quick in body compared to their more "civilized" Altmeri cousins (who often look down upon the Bosmer as unruly and naive). Their agility makes them well-suited as scouts and thieves. However, they are also a quick-witted folk, and many pursue successful careers in scholarly pursuits or trading. Bosmer live two to three times as long as humans; with a 200-year-old Bosmer being old and a 300-year-old Bosmer being very, very old. Though they are considered less influential than some of their Elven brethren, the Bosmer are also relatively prone to producing offspring. As a result, they outnumber all other mer on Tamriel.

The best archers in all of Tamriel, the Bosmer snatch and fire arrows in one continuous motion; they are even rumored to have invented the bow. They have many natural and unique abilities; notably, they can command simple-minded creatures and have a nearly chameleon-like ability to hide in forested areas. Many in the forests of Valenwood follow the tenets of the Green Pact. These "Green Pact Bosmer" are religiously carnivorous and cannibalistic, and do not harm the vegetation of Valenwood, though they are not averse to using wooden or plant-derived products created by others.

Bosmer make good stealthy archer characters. They do well in any faction where those abilities are prized - the Morag Tong, Great House Hlaalu, the Thieves Guild. With a big boost to Marksman, a good bonus in Sneak, and 50 speed to start, you have good natural ability for sniping and skulking. Racial skill bonuses usually aren't significant, but the +15 to Marksman is hard to ignore, especially since there's not much else to be a decision-swinging bonus, and it can make a positive difference, especially if your Class has Marksman as a Minor Skill.

Bosmers' disease resistance is helpful unless you intend to become a Vampire. The Beast Tongue ability has limited use, unless you like moving a special creature such as Creeper from town to town with you, or if you get mobbed by low-level creatures early in the game.

A downside to being a Bosmer is low strength, so you may have trouble carrying a large supply of ammunition, meaning more trips to the store. This will be largely mitigated if you aren't weighed down by Heavy/Medium Armor and heavy weapons like battleaxes - though if you do use them you'll quickly build your Strength.