The UESPWiki – Your source for The Elder Scrolls since 1995
< Morrowind: Creatures: Special Creatures
Jump to: navigation, search 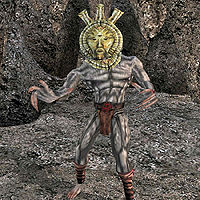 Dagoth Ur, also known as Voryn Dagoth and the Sharmat, was the immortal Lord High Councilor of House Dagoth, who dwelt beneath Red Mountain with his kin, the Ash Vampires, and legions of Corprus monsters. As a mortal, Lord Voryn Dagoth was one of the few who knew about the Heart of Lorkhan, together with Vivec, Almalexia, Sotha Sil and their leader Lord Indoril Nerevar. Dagoth claimed that the Dwemer high priest Kagrenac was drawing power from the Heart using special tools to create a mechanical god, Numidium, that would be used against the Chimer. After Azura confirmed Dagoth's story, action was taken to stop the Dwemer, starting a war that culminated in the disappearance of the Dwemer and the transformation of the Chimer into the Dunmer.

Following the defeat of the Dwemer, the Tools of Kagrenac the Master Craftsman fell into the hands of the Chimer, and Lord Nerevar held the burden of deciding what to do with them. At first, Dagoth himself urged for their immediate destruction, either of the Tools or the Heart itself, which led Nerevar to believe he could be trusted to guard them while Nerevar consulted his councilors, the Tribunal of Vivec, Almalexia and Sotha Sil (and the Dunmer's Daedric patron Azura).

Sadly, when Nerevar and the Tribunal returned to Red Mountain with the conclusion that Kagrenac's Tools should be preserved but never used, Dagoth refused to give them up, maintaining that he had been entrusted with guarding them. Unbeknownst to them at the time, Dagoth had experimented with the Tools on the Heart during Nerevar's absence and somehow managed to steal some of its divine essence and power. He now called himself Dagoth Ur and was forever after known by that name (it is possible Nerevar may have actually coined the name). Nerevar and the Tribunal's guards defeated Dagoth Ur, who was driven off and thought to have been killed. His House ceased to exist; the remnants were either killed or absorbed into the other Great Houses (although it would be resurrected later). However, Nerevar was mortally wounded and died shortly afterwards.

Some sources insist that Nerevar died at the hands of the Tribunal, that they murdered him when he left Red Mountain to consult with them, and it was they who fought Dagoth Ur for the Tools, and Dagoth fought to avenge Nerevar's death. These assertions were vehemently denied by the Tribunal Temple, as well as Vivec; even Dagoth Ur's account contradicts this, as he admits that he and Nerevar came to blows beneath the mountain. Regardless, the Tribunal did not obey Nerevar's dying wish: years later, when Sotha Sil had learned their secrets, the Tribunal returned to Red Mountain and used Kagrenac's Tools to steal divine powers for themselves. Dagoth Ur also managed to forge a connection to the Heart somehow: he remained alive and immortal, albeit temporarily bodiless and presumed dead.

The Tribunal's ambition proved to be disastrous, despite the many great and heroic deeds they accomplished in their divine states. In 2E 882, as the Tribunal journeyed to Red Mountain to renew their connection to the Heart in a bathing ritual, they once again encountered Dagoth Ur, reborn to a new incarnation, and with divine power that could more than match their own. Unable to enter Red Mountain's Heart Chamber, they were forced to retreat. Dagoth Ur had sole control of the Heart from this point on and grew stronger while the Tribunal grew weaker.

Later successes allowed Dagoth Ur to expand his sphere of influence further: at first to nearby Dwemer citadels, and then even further by means of spreading blight diseases. In 3E 417, the worst blow came: as part of a misguided attempt to recapture the Dwemer citadels, Almalexia and Sotha Sil lost the artifacts Sunder and Keening, two of Kagrenac's Tools, and had to be rescued by Vivec. Eventually, the Tribunal was forced to retire from their previously active lives and devote most of their time to maintaining the magical Ghostfence they erected to prevent Dagoth Ur's sphere of influence from spreading. Even this was only a partial success; blight-infected creatures could fly over it, and there was a passage below the ground to the lost Dunmer Fortress of Kogoruhn, the stronghold of House Dagoth in life, through which other diseased and Corprus-infected creatures could escape Red Mountain.

Now possessing only one of Kagrenac's tools, the gauntlet Wraithguard, the Tribunal could not - dared not - even pass the bounds of their own Ghostfence to recapture the others. As Sotha Sil and Almalexia withdrew from the world, Vivec stood alone in maintaining the Ghostfence, an effort that took so much of his energies he could not stir out of his palace, and his Temple's Ordinators ran out of his control and became ever more fanatical and rigid as the faith of the Dunmer wavered. Meanwhile, Dagoth Ur set about constructing Akulakhan, the Second Numidium, a brass machine god he would use to conquer all of Tamriel. For more information, see the main Lore article.

If you have not yet gotten all three tools of Kagrenac:
If you do have the three tools (Wraithguard, Keening, and Sunder):

If you have not yet gotten all three tools of Kagrenac:
If you do have the three tools:

This is dialogue he may say when hit in Akulakhan's Chamber after you have "defeated" him the first time: