The UESPWiki – Your source for The Elder Scrolls since 1995
< Morrowind: Creatures(Redirected from Morrowind:Dremora Lord)
Jump to: navigation, search

This article is about the lesser Daedra found in Morrowind. For quests from the Daedric Princes, see Daedric Quests.

Daedra are divine beings that did not take part in the creation of the Mundus, and thus retain the full breadth of their power. They have a very real impact on the mortal realm; in one way or another, Daedric influence touches everyone on Tamriel.

The word "Daedra" is of Aldmeri origin, and roughly means "not our ancestors", as opposed to Aedra—"ancestors". Technically, only the plural is written "Daedra", but this word is frequently used in singular as well. The proper singular form is "Daedroth", but that has come to refer to a specific species of Daedra. Different cultures have their own myths and names for Daedra, as well.

Daedra are often referred to as demons, but this is misleading. All Daedra have a penchant for extremes and are therefore capable of tremendous acts of devastation, but their different spheres make them apply their power in different ways, and their infinite diversity makes speaking about them generally difficult. Thus, it is often impossible to accurately label them as "good" or "evil"; the one thing that can be stated with certainty is the Daedra are beyond mortal comprehension (as mortals seem to be beyond Daedric comprehension).

Daedra come in many forms. Undoubtedly there are true Daedra, such as the Daedra Princes and highly intelligent Dremora. There are many lesser beings known to be in league with these greater powers, but whether each type constitutes actual Daedra is unknown.

A Daedroth's physical form can be ruined, but it cannot be truly killed; the soul (more specifically known as the animus or vestige) of a slain Daedroth returns to the void of Oblivion until it manages to coalesce into a physical form again. A slain Daedroth is often said to have been "banished" or "purged" instead of "killed" to reflect this. It is not known what happens to a Daedra killed in Aetherius, though it has been suggested that this may be the one way to permanently kill a Daedra.

Daedra are great imitators, and their creations are described as mimicking things found on Nirn in an outlandish or even corrupted way. They are capable of creating seemingly indestructible and mighty daedric armor and weaponry through dark rituals. 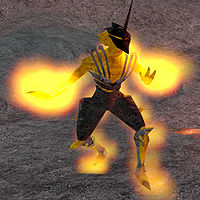 A powerful fire elemental Daedra which can be summoned by mages and hunted as a source of fire salts. Despite being made of fire, they will still take damage in lava and can move through water. 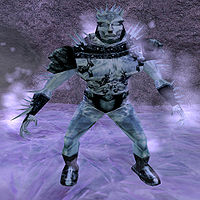 A powerful frost elemental Daedra which can be summoned by mages and hunted as a source of frost salts. 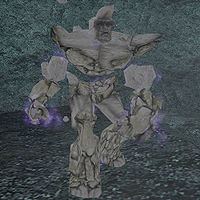 The most powerful atronach; a lightning elemental Daedra which can be summoned by more powerful magic users. 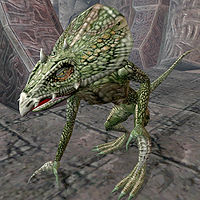 A fierce, large, lizard-like Daedra which is commonly sought for its heart for use in Alchemy. Strong, but slow, with a speed of 14. The second most common Daedra, after the scamp. Although commonly associated with Mehrunes Dagon, it can be found in other planes of Oblivion. 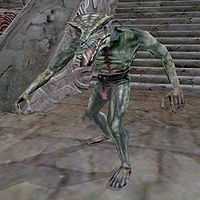 A bipedal Daedra with a large, crocodile-like snout. Daedroth have excellent melee and spellcasting abilities and should be confronted with caution by experienced adventurers only. Their hearts are commonly sought for their magical properties. 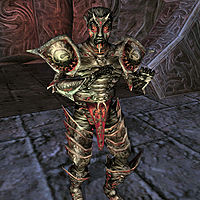 Intelligent and powerful war spirits in the service of Daedric Prince Mehrunes Dagon, Dremora are powerful foes and typically carry a range of high quality weaponry. Traditionally, Dremora are courteous and aware, but in many cases arrogant. However, this can only be sourced from the few Dremora that actually speak in the game. 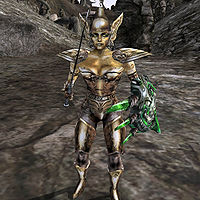 These magical females are the spawn of Sheogorath and are feared for their combat abilities. They spawn with high-level weaponry and shields, and have the highest soul value of any generic Daedra type. These creatures can be found in tombs, shrines, and wandering the Grazelands. They can also be summoned by Summon Golden Saint. Golden Saints are the only source in the game for the useful Daedric tower shield. 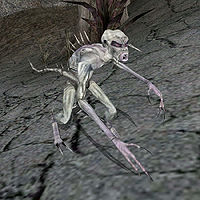 The Hunger is one of the many servants of the Daedric Prince Boethiah and is known to be capable of quickly destroying its opponents' armor and weapons. The hunger uses its long tongue to attack as well as its claws and spells. A summoned hunger can make a useful guardian against a well-armored foe.

It is one of the two creatures in the game without unique sound effects - it shares sounds with the alit. 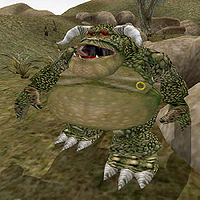 Very large, but none too intelligent, Ogrims are servants of the Daedric Prince Malacath. Unlike the other Daedra listed on this page, there are no Summon spells associated with this species. 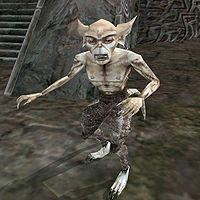 A weak and cowardly servant of Mehrunes Dagon, it is both the most common Daedra in the game and the weakest. They are immune to unenchanted iron and steel weapons. 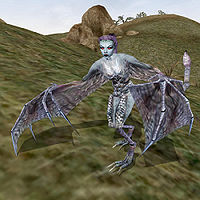 A female formed Daedra with wings operating as messenger of the Daedric Prince Azura.