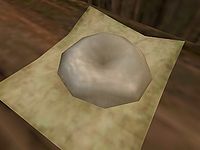 "Dreugh wax is a tough, waxy substance with modest magical properties, scraped from dreugh shells. Dreugh are powerful aquatic creatures, and hunting them for their hides and wax is a dangerous occupation."

Dreugh wax is found by killing dreugh, which can be found anywhere there is deeper water. It can be donated at the Koal Cave shrine in order to complete the Pilgrimages of the Seven Graces for the Tribunal Temple. Additionally, if you have killed the dreugh warlord inside that cave, donating dreugh wax will earn you a free enchanted dreugh cuirass. There is no limit to the number of free armors you can acquire this way, and they are worth quite a bit of money, so this is a quick and dirty way to build up your cash supply.

The following vendors carry a restocking supply of dreugh wax:

Loose samples can be found in the following locations: