The UESPWiki – Your source for The Elder Scrolls since 1995
< Morrowind: Places: Cities & Towns
Jump to: navigation, search 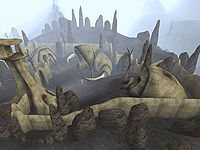 Indarys Manor is a Redoran settlement in the Ashlands region, located on the site of Bal Isra. House Redoran defends this settlement as their commissioned stronghold, although House Telvanni and House Hlaalu don't share the same idea. It is the most populated of the three strongholds.

Indarys Manor is a typical Redoran settlement built to look like the chitinous shells of local fauna. The settlement is walled in, and has a lookout tower constructed next to the entrance to the settlement.