The UESPWiki – Your source for The Elder Scrolls since 1995
< Morrowind: People / Spell Merchants / Transport
Jump to: navigation, search 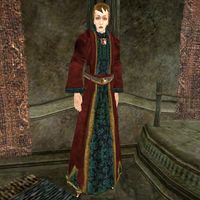 Masalinie Merian is a Breton who serves as guild guide for the Balmora Guild of Mages. In addition to the usual duties of offering quick transport to the other Guild Halls, Masalinie also has a selection of spells for sale. Both of these services are available to fellow Guild members and non-members alike, though naturally those in the Guild will receive a significant discount. She will have a little info for you regarding the Stolen Reports quest, but she is otherwise not involved in any quests.

Note that it is pretty much useless, as the only way to catch Corprus disease is part of the Main Quest, and is unavoidable by any means. Also note that the misspelling of "Corprus" is actually seen in the game.