The UESPWiki – Your source for The Elder Scrolls since 1995
< Morrowind: Places: Dwemer Ruins
Jump to: navigation, search 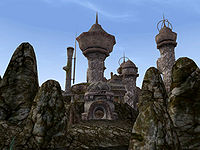 Mzahnch is a Dwemer ruin on the first large island east of Ald Sotha.

The ruin is divided into two areas, including a main area and a lower level.

There are six Dwemer centurions here. There is a key to a chest in the upper area, on a round stone cylinder, hidden behind pipes. The chest is located in the lower level. Several kegs contain scrap metal and rare ingredients. A trapped Heavy Dwemer Chest contains a random Dwemer object and ten Dwemer coins.

There are three Dwemer Centurions and the key from the other area can be used on an Ornate Dwemer Chest here for some random Dwarven objects and 25 Dwemer coins. Six kegs contain scrap metal and rare ingredients.