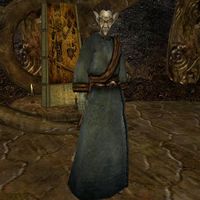 Niras Farys is a Dunmer priest who serves the Tribunal Temple in the Telvanni Council House in Sadrith Mora. There he sells books (mostly religious texts), potions, spells, and spellmaking services to all who need them, though he has no gold with which to purchase anything. Other than a rumor about Mistress Therana and her slaves, along with some minor grumbles about the quarters provided by House Telvanni, he doesn't say much.

He wears a common robe with matching belt and shoes. He also carries a silver staff of shaming and 5 gold.

Niras has the following spells available for sale: