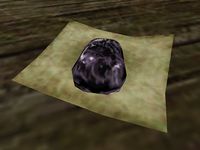 "Raw ebony is one of the most precious substances in the Empire, and most of the continent's deposits are here on Vvardenfell. Raw ebony itself is an extremely hard, durable, black glass-like substance, said to be the crystallized blood of the gods. Raw ebony is protected by Imperial law, and may not be mined or exported without an Imperial charter. Ebony smuggling is a profitable but dangerous source of illegal wealth on Vvardenfell." Tendris Vedran and Anarenen

Raw Ebony is a valuable commodity, mostly found in well-guarded mines. It is only sold by two vendors with limited supplies of it*, though all who buy ingredients will purchase it from you, despite such transactions being forbidden without a charter. Raw Ebony can also be found in barrels and other containers in Dwemer ruins, though these are less predictable. Mines are the best place to find the substance, though you have to keep an eye out for witnesses when you steal it. The other hindrance to this practice is that Raw Ebony is relatively heavy. However, its comparatively high value can make it worth the effort if you're up to it.

If you have the Tribunal expansion, you can use it to have Ebony Armor crafted for you by Bols Indalen at the Craftsmen's Hall in Godsreach.

There is a special type of Raw Ebony, ID: ingred_Dae_cursed_raw_ebony_01, which can be found as offerings in Daedric shrines. These are identical to standard Raw Ebony in appearance and effects, but they are cursed, and picking one up will cause you to be attacked by a Dremora Lord.

Raw Ebony is one of only two ingredients in vanilla Morrowind which can be used to create Restore Speed potions, the other ingredient being resin. The Tribunal expansion adds two other ingredients with this effect. However, combining Raw Ebony with its cursed variant leads to a potion containing all four effects of Raw Ebony.

Finally, two other abundant locations are added by official expansions and plugins: